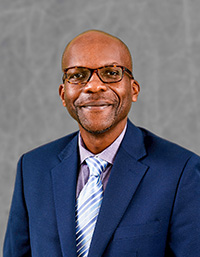 Dr. Thierry Wandji Ketchiozo has spent 15 years on the front lines of cybersecurity efforts, working as an engineer for the Department of Defense fighting attacks that are growing more and more sophisticated and posing a dire threat to the nation’s security.

Now, Ketchiozo has joined NC State as the director of cybersecurity education in the Department of Computer Science to help train the next generation of engineers and computer scientists who will continue his work protecting critical systems from dangerous attacks.

The newly created position is a critical piece of CSC’s effort to increase its role as a national leader in cybersecurity education and research and a key part of the Security Computing Institute (SCI), founded at NC State in 2019 with a goal of enhancing the security and privacy of computing systems through basic and applied research and advancing and delivering cybersecurity education.

“I want to be able to make NC State the household name when it comes to cyber education within the state, outside of the state and outside of the United States,” Ketchiozo said.

Ketchiozo, who starts with NC State on August 24, holds a bachelor’s degree from University of Montreal, master’s degrees from Morgan State University and University of Maryland University College (UMUC) and a Ph.D. from George Washington University. After jobs in private industry, he held senior positions as a researcher and software and systems engineer for the U.S. Naval Research Laboratory and Naval Air Systems Command.

At the same time, he has held teaching positions in the area of cybersecurity at Morgan State and UMUC. Ketchiozo said that he sees an urgent need for increased cybersecurity expertise in the United States and saw the new position at NC State as a chance to pass on what he has learned in industry, academia and public sector work both to students and to professionals who need more expertise.

Along with that need comes opportunity for those with experience in the field. At the Department of Defense, Ketchiozo said, it’s difficult to recruit engineers with the broad expertise to fend off constant cyberattacks. It’s a common story across the country: The Cyberseek organization, part of the National Institute of Standards and Technology, currently indicates a half-million unfilled cybersecurity positions in the United States.

Companies and government entities are under a constant barrage of attacks that can cost billions of dollars annually. And the recent COVID-19 outbreak in the United States has only exacerbated that problem, Ketchiozo said, with so many professionals working from home and relying even more on technology, often using personal tech that isn’t secure.

Ketchiozo’s position is broad and will include supporting new degree programs in CSC and a new cybersecurity scholarship program and working to apply for additional grant funding and furthering K-12 outreach efforts including summer camps.

The last task is particularly important, Ketchiozo said, if the United States wants to create a new generation of cybersecurity experts who can keep the nation safe. We’ll need more domestic students pursuing advanced degrees in the field, and that’s a task that can’t wait until students are college-age; outreach that helps promising students decide to pursue cybersecurity work must begin while they are still in grade school.

“You have to start early,” he said. “You need to have a comprehensive plan.”

CSC in recent years has worked to build off a strong foundation in cybersecurity education and research and become a global leader.

That begins with SCI, which pulls together much of the work and funding already in place in CSC and other parts of the University. Chief among them is NC State’s Science of Security Lablet, a National Security Agency program that has brought $19 million in research to NC State since it was established in 2012. Science of Security Lablets are multi-disciplinary labs at a handful of leading U.S. research institutions that promote security and privacy science as a recognized field of research and encourages rigorous research methodologies.

CSC established a master’s track in security in 2017 and an undergraduate track in 2019. A new undergraduate concentration will start in spring 2021 and the department plans to soon propose to University officials a master’s degree in cybersecurity.

In 2019, the department received a $2.75 million award from the National Science Foundation to launch a CyberCorps Scholarships for Service program. Five scholarships will be awarded annually to graduate and undergraduate students specializing in cybersecurity.

In addition to full tuition, the two-year scholarships provide a generous stipend, health insurance and an allowance for other professional expenses. In return, students agree to work after graduation with a federal, executive-branch government agency for an equal period of time.

Williams’ said the vision for SCI is to create a hub that is recognized across the state as the epicenter for cybersecurity education in North Carolina. Part of that vision is to offer resources for companies that want to train or retrain their employees on security, something that the department isn’t offering currently. Establishing those resources will require building partnerships across the state, which Williams sees as an important part of the new position.

She said that Ketchiozo stood out as the right fit for the new position because of his very strong technical background, and the fact that he has helped establish similar programs at Morgan State and UMUC.

To help further that effort, future plans include creation of a director of cybersecurity practice position.

The payoff, for the state and nation and for NC State students seeking good career opportunities and work that makes a difference, is huge.