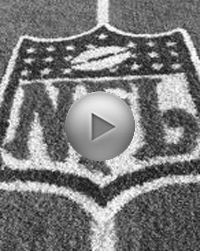 Football Fan Scores a Touchdown as Carolina Panthers IT Professional

Christa Hayes has always loved football. Growing up, she was an avid Carolina Panthers fan and never missed a game.  She loved sports so much she knew she would have to somehow incorporate it into her career, but since she wasn’t a player herself, she had to get creative.

After many weekends of rooting for her beloved Panthers, it was time to decide on a college and she chose North Carolina State University without a second thought.

Just like a running back weaving through the defensive line toward the end zone for the highly anticipated touchdown, Hayes maneuvered her way through the myriad of courses required by the major and not with a lot of background experience.

“In high school, I had only taken Basic and I only took that because my dad, who is a software developer, encouraged me to,” she said. “I did not go in to the program with a lot of experience and there were other students who had been coding for years, but we were all put on teams together and that really helped me advance my knowledge base.”

As she progressed and gained more knowledge, Hayes began the co-op program to give her real world experience while still finishing her degree. She interned at IBM with her first two rotations in software support and her other rotations in software development. But just like the player that catches that unbelievable Hail Mary pass, Hayes got her own Hail Mary in the form of an internship.

“My junior year, I landed a summer internship at the National Football League office in New York,” she said. “I worked in the IT department, working on software that developed video in reverse, so it could be distributed to the individual clubs. I also worked on the search option for aggregating lists of plays.”

Having that taste of working in the football environment, Christa Hayes knew that was the future for which she was destined. And her destiny came in full circle the day she saw a 60 Minutes interview with Panthers Coach John Fox, who stated that the Carolina Panthers hired more software developers than water boys. That was all the information that she needed.

“When I got out of school, I went to work for Lucent Technologies,” Hayes said. “I stayed there a year and then they started having layoffs. I got other offers, but I knew football was what I wanted to do, so I just waited for an opening.”

And just as the quarterback sees an opening and makes a great play, Hayes saw her opening and landed a job with the Carolina Panthers as the first female IT engineer the team has ever had.

“I develop software for the team and have worked on several in-house applications used by the coaching staff and the college scouting system,” she said.

Her real world experience both in the NC State co-op program and in the classroom proved to be right on target for the kind of pressures she faces in the football industry.

"When I was in school, a software engineering agile development class was introduced and it was tough because they would change the specs on us at the last minute, but that is just like the real world,” Hayes said. “We take our specs right from the coaches and we have to hear what they want in an app and translate that into making it fit their needs. They constantly have changes that they need made in real time and we have to get the plan in motion by doing it right the first time because we don’t have time to test it in a beta application." 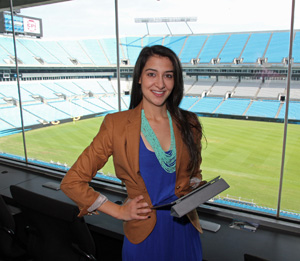 A perk of the job is season tickets, although sometimes that involves working the games in the press box.

“We have a very small IT department, so you really have to be a jack of all trades,” she said. “Even when we work the games, most of the work gets done before the game starts, so I do manage to watch most of the games from my seat.”

Despite the unpredictability of professional sports with walkouts and contract negotiations, Christa Hayes has found a home and she says the sporting industry will always be her field of choice. Seeing as how she made her passion her career, how would she encourage others to do the same?

“The best advice I could give is that work experience is invaluable,” she said. “Because of my co-op, I got the League internship and I knew I’d be ok with application development because I had done it in the real world.  Work experience while you are in school is extremely important!”