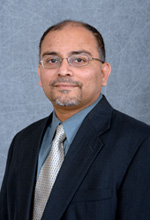 Congratulations to Dr. Rudra Dutta, professor of computer science in the NC State Computer Science Department, on being named a 2016 Distinguished Engineer of the Association for Computing Machinery (ACM).
The ACM has named 45 Distinguished Members in 2016 for their contributions to the field of computing.  Only nine of the 45 are Distinguished Engineers, and Dutta is the only Distinguished Engineer that is a university researcher; the other eight work in industry.  Dutta is only the third professor in the NC State Computer Science Department to reach this level of recognition.  He joins Drs. Frank Mueller and Laurie Williams as Distinguished Members of the ACM.
Achievements of the Distinguished Members have advanced science, engineering and education of computing, and highlight the growing role of computing in the major technological advances shaping society today.
The 2016 ACM Distinguished Members work at leading universities, corporations and research institutions around the world, including Austria, Brazil, Canada, China, Hong Kong, India, Italy, Korea, Japan, the Netherlands, Singapore, Spain, the United Kingdom, and the United States. These trailblazers have made contributions in a wide range of technical areas including computer science education, data privacy, security, computer networking, machine learning, distributed systems, multimedia computing, human-computer interaction, programming languages, mobile and wireless networks, database management, information retrieval, computational biology, molecular computing, and software engineering, among others.
The ACM Distinguished Member program recognizes up to 10 percent of ACM worldwide membership based on professional experience as well as significant achievements in the computing field.