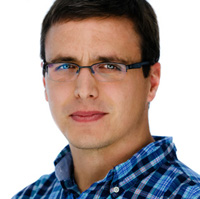 Please join us on March 22nd at 6 p.m. in room 1231 in Engineering Building 2 for our final Spring 2016 talk in the Fidelity Investments “Leadership in Technology” Speakers Series.
Our special guest speaker will be Michael DeHaan, founder of Ansible.  His talk topic will be “Achieving Massive Open Source Project Adoption.”
DeHaan, a 2001 NC State Computer Science graduate, has created several popular open source projects in the IT Systems Management space, including most recently, Ansible, which is one of the 100 most popular projects on GitHub. Ansible is in use by places like Twitter, eBay, Verizon, NASA, ILM, Rackspace, and Electronic Arts and sold to Red Hat in 2015. Prior to Ansible, DeHaan’s other projects included Cobbler - a PXE and virtualization install server, which was used to deploy the top level DNS servers for the internet, as well as the multiplayer infrastructure underneath Modern Warfare 2 and 3. He has also developed storage software for IBM, and video management and systems management solutions for other local startups.
Abstract:  Ideas are spreading faster these days. When properly conceived and constructed, an open source project can reach massive levels of global adoption in a matter of years, if not months. Compared to sales-driven proprietary software, this gives an open source project tremendous advantages - the software not only spreads faster - it is possible to have hundreds or even thousands of developers to assist in the design and development of the project. Access to massive amounts of field data early on can help build better, more focused products. Designing and coordinating a project properly requires knowledge of how to best leverage the open source community, market the project, and recruit new users into the fold. Capitalizing on an open source project commercially, without subverting the very nature of the project, is also a bit of a black art. This won't be a list of superlatives about open source though - rather, this is a how-to guide. In this presentation, we'll cover a wide variety of tips to make a good software idea more popular and successful, and optionally, to form a viable business around it.
The event is free and open to the public.  Ample free parking is available on Centennial Campus after 5 pm.  For directions and more information, click here.
These lectures have been approved by the CSC Graduate Oversight Committee to count toward the required lectures for graduate students.
~coates~