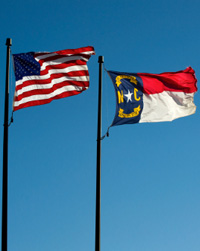 Conen Morgan (BS '04) is a whirlwind of movement, activity, and energy. Co-owner of his own company, he works alongside political organizations addressing technological needs including web design, data mining, and database management. But currently he spends only about 10% of his time working with his company. As a matter of fact, he has a partner and new office location in Raleigh that he has yet to even see. For now, he is living in Lexington, NC, spending the remaining 90% of his time working on political campaigns. He has recently been named the Campaign Manager for Congressman Bob Etheridge.

"All that work I put in at school... all the time in class… it was all for this. It paid off in the end. I wouldn’t trade what I am doing now for the world."
"Every industry needs to be refined. Your impact is not specifically limited to a technical perspective… you can impact all aspects of life as we know it... whether in politics or education or anything."
Beyond all of his work commitments, Conen is very involved with community, political, and educational activities. He is the current President of Young Democrats of North Carolina, serving as part of the State Executive Committee of the NC Democratic Party and participating in events like the Annual Jefferson Jackson Dinner in Raleigh. He volunteers with the North Carolina Science Olympiad, which is a nonprofit organization with the mission to attract and retain the pool of kindergarten through 12th-grade students entering science, technology, engineering, and mathematics degrees and careers in North Carolina. And within the next 18 months, he intends to go back to school to get his master’s degree and eventually a law degree.

"I want to be the next Michael Bloomberg… nothing too serious… businessman, politician, philanthropist, millionaire…."

Conen was not raised with a lot of advantages. He was initially raised by a single mom who worked multiple jobs to take care of her family. "I knew I needed to be able to earn a living. I was good in math and science. I figured I would go after the bread and butter and come back to politics later." Fortunately for Conen, he has been able to combine his education in computer science with his passion for politics and discovered a career that engages all of his personality and drive and interests into a calling that shapes the world around all of us.