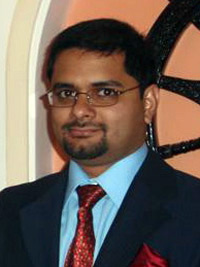 Congratulations to Dr. Robert St. Amant and his former student, alumnus Reuben Cornel (MS ’09, pictured at right), along with collaborator Jeff Shrager (Stanford University and CollabRx) for having their paper entitled “Collaboration and Modeling in CogLaborate" selected for a Best Paper Award at the Behavior Representation in Modeling & Simulation (BRIMS) Conference.

The paper describes the CogLaborate system, a collaborative, tool-based environment for the ACT-R cognitive modeling community. CogLaborate is based on BioBike, which supports collaboration between biologists and computer scientists. The paper discusses how comparable benefits can be brought to cognitive modelers and presents the design of CogLaborate, its frame-based representation for models, and a proof of concept in the form of an ACT-R module developed within the environment.

The paper was presented by Frank Ritter, Professor in the School of Information Sciences and Technology at Penn State, on behalf of the authors, on March 25, 2010, in Charleston, SC.