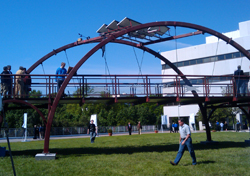 The completion of this pedestrian bridge is part of the 2009 Engineering Day for North Carolina. It represents the ingenuity of the College of Engineering at North Carolina State University and our commitment to quality.

The design used for the bridge came from a competition among the Civil Engineers. After the design was chosen, the three teams banded together to oversee the physical construction of the bridge.

At the same time, the Electrical and Computer Engineers (from here on, ECE) and the Computer Science (from here on, CSC) teams were working on a network of sensors to gather crucial data concerning the bridge. In real world applications, this data is absolutely vital for engineers to have. It allows them to diagnose potential safety problems as well as perform regular maintenance. The advent of computer based sensors makes this important information even more easy to gather. The informations might have previously required a large team of people physically on the bridge, can now be automatically gathered and sent to a computer database. The data can then be displayed via a desktop application, or a website, as we have chosen to do.

The ECE team was responsible for powering the bridge. In order to keep with NC State's desire to lead the way in energy, they chose to use solar panels to supply power to the sensors. The team had to make sure that the sensors had enough power to gather and forward the data. They also provided lighting, a crucial factor for safe bridge navigation. To give the bridge a distinctly "engineering flair" they also provided a clock which displays the time in binary!

Finally, as the CSC team, we were responsible for the data collection and display. To do this, we used SUN SPOTs, a very powerful minicomputer that is easily programmable. The SPOTs have a few onboard sensors that we used, but they are also are very extendable. They provided the foundations for information gathering. Once the data was gathered by the SPOTs, we had to do something useful with it. We sent the data to a laptop which forwarded the data over AT&T's 3G network the data to a server located on NC State's Centennial Campus. Once the data arrives on the server, it is stored in a database. The data can then be viewed on the website's sensor page

For more information see this project's Web site at http://bridge-viz.netlabs.ncsu.edu:8880/