Innovation in Action: The Next Cool Thing 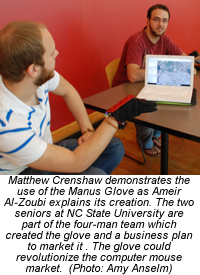 Ever wondered if there was an easier way to control all your favorite devices?  Something easy to use and intuitive, at once inconspicuous yet stylish?  Something to revolutionize how you access technology? Thanks to the inspiration of a course in NC State University's College of Engineering and the innovative minds of a few students, that “next cool thing” is in the works.

“We're calling it the Manus Glove,” said Ameir Al-Zoubi, a senior in computer science at NC State and member of the four-student team who developed the device. “Basically, it is the mouse of the future.”

Based on technology similar to that used in the “Wiimotes,” the primary controllers for the Nintendo™ Wii game console, the Manus Glove uses motion control to interpret small motions into acceleration.

“This maps the movement of your hand, not the position of it,” Al-Zoubi explained.

“The learning curve takes maybe a half an hour at most,” said team member Matthew Crenshaw, a senior in computer science.

While explaining the device, he flicked his way through application windows, browsing web pages and dragging and zooming online maps to demonstrate the glove's capabilities. He controlled the speed of the cursor's movement with the angle of his hand, quickly and easily changing the cursor's direction, increasing, decreasing and stopping its motion all with small turns of his wrist. A flick of his finger backward sent his browser window back a page; pinching his fingers together opened documents and links.

“That's one of the key features, it's just so fun to use,” said Al-Zoubi.

The glove has sensors attached to the ends of each digit so that touching the thumb to other digits acts as a “click” and activates hotkeys. It works with computers and other devices that rely on Bluetooth technology, utilizing the capabilities already used in the individual control of cell phones, mp3 players, headsets, keyboards and other devices.

One of the group's main goals for the development of the glove was to unify control of these and other wireless devices, according to Al-Zoubi.

“There's been great movement towards multi-functional devices in the market,” he pointed out. Cell phones evolved into cameras and mp3 players; now they're more like mini computers with phone capabilities. Even shoes can record the distances and paces of a run and can sync up to the playlist on the runner's mp3 player. There are examples everywhere.

“We have designed a glove to control your computer,” said Al-Zoubi. “It's also easy to use and more intuitive than a standard mouse.”

There are many devices in the market currently working towards convenience and centralization, but not in such an intuitive — or stylish — way. There are now ergonomic keyboards and better headsets and microphones, but the mouse is the one thing that hasn't really changed.

“People are too scared to change it, to shake up the market,” said Al-Zoubi. And that's exactly what the group wants to do with the Manus Glove.

“As far as I can see, no one's really gotten into this,” said Dr. Alan Tharp, professor of computer science at NC State and leader of the “Innovating in Technology” course that inspired the project. “With the iPhone, the iPod, etc, it's more an idea of touching the screen and getting a visual display. But no one's really caught on to this idea of having this three dimensional motion that gives you so much freedom. With the mouse you're stuck right there, but with the glove you can do all sorts of things.”

So how did this idea come to be a prototype?

“We had a design project for a class; we were told to come up with something that bugged us and then a solution to it,” said Al-Zoubi, who worked with Crenshaw, David Catchings and John Lewis, all seniors in computer science. “We were bugged by new mice that look fancy but that are the same thing, really.”

The ease-of-use and intuitive nature of the device, plus it's ability to centralize the control of wireless devices, create a wealth of possibilities for the future of the project and product.

“We're thinking we could make this like a leather driving glove,” said Al-Zoubi. “As a businessman, you could wear it all the time and control all your devices at once. Everything you need is already in the glove.”

This is the main market the group targeted in their business plan, and they see its greatest selling point as a tool for professionals and a particularly helpful aid in presentations. The glove is more natural, easier to use and less distracting. Instead of having to hold a mouse, remote, or even clicker in your hand, simply slip on a sleek glove and control all the necessary electronics with simple and innocuous movements of your fingers and wrist.

In addition to the business class, the device will have a great appeal to the “cool tech” people, said Al-Zoubi, those that have the coolest laptops, that get the newest phones and mp3 players.

“Devices like those, and this, make a statement about who you are and how you like to access technology,” he said. “Technology is a part of everyone's daily life, devices like these personalize it.” And just as the white earbuds of the iPod have become a fashion statement, the group can see the Manus Glove becoming the next cool thing to wear.

There are many aspects and possibilities, according to Al-Zoubi and Crenshaw, that could be explored and developed with additional funding. Physically impaired users could simplify the use of all their devices into one and have complete and accurate control with minimal movements. There are also many possibilities in the area of design so that users could track their hand motions over any type of surface and transfer it instantly to a computer program.

Funding was the group's largest difficulty in developing the device. “Our budget was zero,” said Al-Zoubi. “The school bought some circuit boards and a chip for us. The rest of it was all up to us.”

There were also a few construction and hardware difficulties for the group. “Soldering wires onto the board was the hardest thing ever,” said Crenshaw, laughing. “Keep in mind, we're computer science, not electrical engineering.”

“One of the harder issues is making the components small and compact enough to fit in a glove and still feel like a glove,” added Al-Zoubi. “We don't want something big and clunky; we want it small, sleek, business-like.”

With the prototype they have now, the group is obviously focusing on functionality above aesthetics, but they did make a few adjustments for color.

As Al-Zoubi said, “The colors we were aiming at were black and red.”