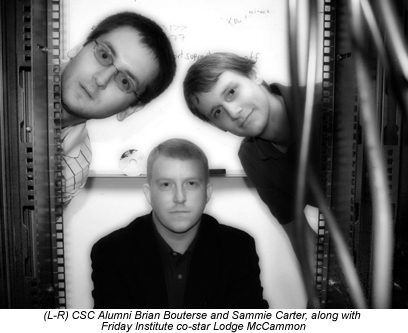 Ever feel like bursting into song at work? Employees at the Friday Institute for Educational Innovation at North Carolina State University did, and now they're virtually world famous.

They also garnered celebrity status at VMworld - a giant trade show held in San Francisco, CA - where they rubbed elbows with VMware CEO Diane Green and rockers Smash Mouth and squeezed in a bit of sightseeing as well.

"People were really excited to meet us," Bouterse said.

"It was fun walking down the street in San Francisco and having people point at us," added Carter.

Producing the video involved the kind of cross-functional collaboration that NC State encourages. McCammon, an accomplished musician with his own home recording studio, wrote and performed the original song. Carter appeared as an interviewer during the video's opening and closing segments, while Bouterse lip-synched his way from the ground floor of the Friday Institute to the "virtualized hardware hotel" up on the second floor.

The production was a decidedly low-tech activity. McCammon created a makeshift steadicam by placing a camcorder on top of a cardboard box on top of a cart. He used his laptop as a teleprompter, positioning it on the cart with the lyrics displayed on the screen, facing Bouterse. During filming, McCammon played the song through the laptop's speakers at half speed (so Bouterse could easily mouth the words as he walked around the building) and adjusted the video in post-production so the songs plays back at normal speed.

"If we'd known we were going to win," Bouterse said, "we probably would have done a second take."

Web sites such as YouTube have helped change the aesthetic of corporate video, putting more emphasis on creativity and less on production values.

"It's not how it looks - it's the idea behind it and the underlying message," McCammon said. "It's not Lord of the Rings, but I think people can connect with it."