Dr. Frank Mueller releases the power of the Playstation3 for science and education

We’ve all seen the commercials for the blade servers touting the plug-in ease with the ability to organize data for an entire company. But at what price? At North Carolina State University, Dr. Frank Mueller imagined using the power of the new Sony Playstation 3 (PS3) to create a high-powered computing environment for a fraction of the cost. 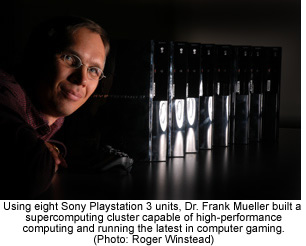 Mueller, an associate professor of computer science, has built a supercomputing cluster capable of both high-performance computing and running the latest in computer gaming. His cluster of eight Sony PS3 machines — the first such academic cluster in the world — packs the power of a small supercomputer, but at a total cost of about $5,000, it costs less than some desktop computers that have only a fraction of the computing power.

“Clusters are not new to the computing world,” says Mueller. “Places like Google, the stock market, automotive design companies and scientists use clusters, but this is the first academic computing cluster built from Playstation 3s.”

Mueller’s PS3 cluster was realized after he spent a few hours one day in early January driving from store to store to purchase the eight machines for his cluster. When he had collected all eight, he returned to his lab at NC State and set to work building a supercomputing cluster.

“Scientific computing is just number crunching, which the PS3s are very good at given the Cell processor and deploying them in a cluster,” says Mueller. “Right now one limitation is the 512 megabyte RAM memory constraint, but it might be possible to retrofit more RAM. We just haven’t cracked the case and explored that option yet.” Another problem lies in limited speed for double-precision calculations required by scientific applications, but announcements for the next-generation Cell processor address this issue.

“In the computing world there is a list of the top 500 fastest computers,” says Mueller. Currently the fastest is BlueGene/L, a supercomputer with over 130,000 processors at Lawrence Livermore National Laboratory. The PS3 cluster at NC State does not break into the top 500, but Mueller estimates that with approximately 10,000 PS3 machines anyone could create the fastest computer in the world â”€ albeit with limited by single-precision capabilities and networking constraints.

The Sony PS3 allows the Linux operating system to be installed, and IBM designed the programming environment for programming the Cell processor (including eight vectorization units), which combined tremendous computing power within a single PS3. According to Mueller, each PS3 unit contains six operational special-purpose cores for number crunching and one general-purpose core that is two-way multithreaded in his configuration, so the eight machines clustered have 64 logical processors, providing plenty of number-crunching ability in addition to running the latest games.

“January 3 is the ‘birthdate’ of this cluster,” says Mueller. “Of course, here at NC State we will use it for educational purposes and for research. We are working with scientists to determine the needs and how our cluster can be used to their benefit, and our computer science faculty is already using the cluster to teach classes in operating systems, with parallel systems, compilers and gaming likely to follow.”