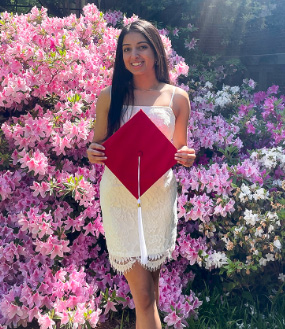 Manali Shirsekar, computer science ’22, realized early on that as a woman in a science, technology, engineering and mathematics (STEM) field, she’d have some extra hurdles to navigate.

Women make up just under a quarter of engineers in the workforce. Before they enter research facilities and offices, finding a supportive community and opportunities to grow outside of the classroom can provide vital help along the way.

Shirsekar felt supported by NC State’s Scholars Program and the Women in Science and Engineering (WISE) Village her first year and the Department of Computer Science’s (CSC) student ambassadors her second year. But progressing into upper-level coursework, she noticed that the targeted assistance she received as a first-year student wasn’t as easily accessible.

Wanting to create opportunities and community for herself and other CSC students, Shirsekar decided to get involved.

Now about to graduate, Shirsekar has juggled many roles, including a researcher within NC State’s Laboratory for Analytic Sciences (LAS), a student ambassador for CSC and president of NC State’s ACM-W Chapter of Women in Computer Science. She attributes these experiences to her success within computer science.

“Service and research are where I grew the most,” Shirsekar said.

Finding space to grow and bond

Shirsekar imagined building a stronger community within CSC, one that could withstand the trials of coursework and research, and eventually COVID-19.

“I wanted to give back after the awesome mentors I had while I was a Villager,” Shirsekar said. “I was welcomed in by my mentors and they were invested in supporting me as a person and student to see me succeed.”

Joining CSC’s student ambassador program was Shirsekar’s first step. Since her sophomore year, she has assisted with outreach efforts to high school students and first-year students.

Shirsekar later became involved in NC State’s ACM-W Chapter of Women in Computer Science (WiCS). In 2021, she was elected president. During a time when everyone was separated due to COVID-19, she saw a need to create a community where female computer science students could find camaraderie.

supporting me as a person and student to see me succeed.”

She went above and beyond to uphold WiCS’ mission to provide opportunities for personal and professional development by initiating and then directing DiamondHacks NCSU, an annual hackathon funded by WiCS. Hosted in April 2021 and April 2022, the event invited students to collaborate on projects centered on industry technological advancements, social inequalities and sustainability.

“Taking this job, it was the best thing I did for myself and the best way to give back to the NC State community,” Shirsekar said. “There is a lack of help for women and minorities that was exacerbated during COVID-19, and it was a special feeling bringing people together during these events that I could’ve only done through WiCS.”

From classwork to lab work

“I like software engineering and how the fundamentals of the degree help me do a variety of things, and it’s exciting to apply my knowledge to research that is so novel,” she said.

With assistance from the Women and Minority Summer Research Program, her first research project was with Laber Labs, a statistics lab focused on data-driven decision making, where she worked on developing a self-driving car with reinforcement learning algorithms and low-capability hardware.

During her junior and senior years, Shirsekar worked with NC State’s LAS in two different roles on projects centered on national security. First as a natural language processing (NLP) researcher, she identified disinformation propaganda being circulated on Twitter, using machine learning to discern which were organic tweets and which were created by foreign adversaries. Now, as a machine learning researcher, she has developed an optimized information retrieval algorithm using clustering and topic modeling.

Shirsekar is staying at NC State for another year to complete her accelerated master’s degree in computer science with a concentration in data science, where she sees the different avenues to apply her skills while staying true to her interests in the areas of national security or cyber-threat detection.

“Getting my master’s degree made sense,” Shirsekar said. “There is a gap in where I am and where I want to be, so that extra training and to work on research more is important.”

She will also continue working with the LAS on two projects. The first will expand on her current research in NLP’s and information retrieval while the second will focus on building a geo-political analytics dashboard.

In the meantime, she is excited to travel to Redmond, Washington, this summer to work at Microsoft’s headquarters as a software engineering intern.