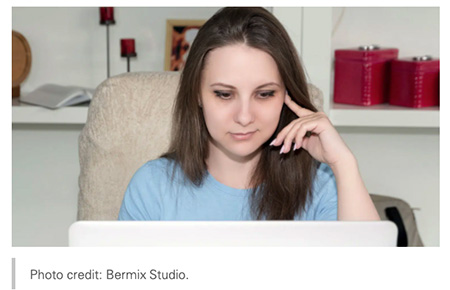 New research from North Carolina State University offers insight into why Facebook’s targeted advertising can sometimes be more like a wild pitch. Researchers already knew Facebook creates interest profiles for users based on each user’s activities, but the new study finds this process doesn’t seem to account for the context of these activities.

Facebook has been open about targeting advertising to individual users based on each user’s interests. It has also made clear that it infers a user’s interests based on that person’s activities. However, it hasn’t been clear exactly how that process works.

“It’s well established that Facebook’s targeting algorithm often sends people ads for things they have no interest in,” Sabir says. “But it wasn’t clear why people were getting the wrong ads.”

“The implications of inferring inaccurate interests on one of the largest social media platforms in the world are significant in two ways,” says Anupam Das, co-author of the paper and an assistant professor of computer science at NC State. “This inaccuracy has both economic ramifications – since it is relevant to the effectiveness of paid ads – and privacy ramifications, since it raises the possibility of inaccurate data being shared about individuals across multiple platforms.”

To learn more about how Facebook generates its interest profiles for users, the researchers performed two studies.

In the first experiment, researchers created 14 new user accounts on Facebook. Researchers controlled the demographic data and behavior of each account, and tracked the list of interests that Facebook generated for each account. (Every user can see the list of interests Facebook has compiled for them by clicking on their ad preferences, then “Categories used to reach you,” and then “Interest Categories.”)

“This first experiment allowed us to see which activities were associated with Facebook inferring an interest,” Sabir says. “And the key finding here is that Facebook takes an aggressive approach to interest inference.

“Even something as simple as scrolling through a page led to Facebook determining that a user has an interest in that subject. For the 14 accounts we created for this study, we found 33.22% of the inferred interests were inaccurate or irrelevant.”

“We then wanted to see if these findings would hold true for a larger, more diverse group of users, which was the impetus for the second experiment,” Das says.

“We found that 29.3% of the interests Facebook had listed for the study participants were actually not of interest,” says Das. “That’s comparable to what we saw in our controlled experiments.

“We also found that most study participants didn’t even know Facebook’s ad preference manager exists. They didn’t know there was a list of interests they could look at, or that Facebook provides at least a basic explanation of why it has assigned a given interest to a user.

“This is an interesting finding in itself,” Das says. “Because the goal of providing all of this information regarding interests is ostensibly to be transparent with users. But given that many users don’t even know this information is available, Facebook is not achieving that goal.”

The paper, “Analyzing the Impact and Accuracy of Facebook Activity on Facebook’s Ad-Interest Inference Process,” will be presented at the 25th ACM Conference on Computer-Supported Cooperative Work and Social Computing (CSCW), being held online Nov. 12-16. The paper was co-authored by Evan Lafontaine, an undergraduate at NC State.

Abstract: Social media platforms like Facebook have become increasingly popular for serving targeted ads to their users. This has led to increased privacy concerns due to the lack of transparency regarding how ads are matched against each user profile. Facebook infers user interests through their activities and targets ads based on those interests. Although Facebook provides explanations for why a particular interest is inferred about a user, there is still a gap in understanding what activities lead to interest inferences and the extent to which the sentiment or context of activities is considered in inferring interests. To obtain insights into how Facebook generates interests from a user’s Facebook activities, we performed controlled experiments by creating new accounts and systematically executing numerous planned activities. This enabled us to make causal inferences about activities that lead to generating specific interests, many of which were not representative of actual user preferences. We also evaluated which activities resulted in interests and found that very naive activities, such as only viewing/scrolling through a page, lead to an interest inference. We found 33.22% of the inferred interests were inaccurate or irrelevant. We further evaluated the interest inference explanations provided by Facebook and found that these explanations were too generalized and, at times, misleading. To understand if our findings hold for a large and diverse sample, we conducted a user study where we recruited 146 participants (through Amazon Mechanical Turk) from different regions of the world to evaluate the accuracy of interests inferred by Facebook. We developed a browser extension to extract data from their own Facebook accounts and ask questions based on such data. Our participants reported a similar range (29%) of inaccuracy as observed in our controlled experiments. We also found that most of our participants were unaware of the availability of Facebook’s ad preference manager, interest inference process, and even interest explanations.