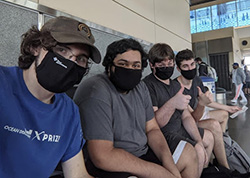 Computer science students, Kaiz Akhtar and Mikey Donohue, and electrical engineering students, Jacob Williams and Julian Berla recently competed at one of the biggest combat robotic events in the country, Norwalk Havoc Robot League (NHRL). Dr. Donald Sheehy, Associate Professor of Computer Science, serves as the faculty advisor for the team. Since they formed their team in 2017, they have competed at over half a dozen events in North Carolina, Florida, and Connecticut. Their “best-performing” robot so far is their spinning antweight (1-lb. robot), “The Wheel of Power” (WoP).  Their WoP Bot is currently ranked #1 antweight in NC and #8 in the world.

“What makes the WoP exceptional is the custom electronic control system we built for it, which allows it to move while spinning instead of just staying in one place. Our system pulses the drive motors with precise timing, such that the driver is able to control the speed and direction the WoP moves in. This style of drive is called ‘translational drift’, and the few robots that do it are known as ‘meltybrains’,” said Williams. 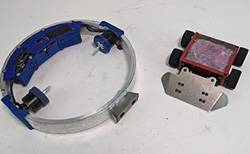 “Seeing the WoP do so well after literal years of work has been very rewarding. One thing that makes the WoP a great project is in its 23 fights, we have almost never lost a fight from being destroyed by the enemy robot. Ninety percent of the time we hold our ground, but the robot malfunctions due to the extreme forces the WoP puts itself under.  It routinely pulls 400 gs of centripetal acceleration, which would turn a human into jelly! Iterative design is a core ideal of our team, so when something breaks we find the root cause and eliminate the problem. We believe that the next version of our robot, the third major revision, will be nearly invincible.”

Because of the success of their WoP bot, they decided to apply their meltybrain control system to a beetleweight (3-lb. robot) class. They designed, machined, assembled, and programmed “The Greatest Danger'' robot for four months to compete at the NHRL event in September 2021. They started by researching and selecting parts and stock material. Next, they designed their robot in Solidworks, “a computer-aided design software that helps to create 3D solid models for mechanical and product designing applications.” Finally, they did their machining at the ECE Makerspace. They develop their electronics and code in parallel with the mechanical parts of the robot as best as they can. For “The Greatest Danger,” they decided to switch from an Arduino-based robot to a STM32-based robot because it offers faster compute times and more low-level control. Unfortunately, they did not have enough time to run as many printed circuit board (PCB) revisions as they would have liked, which led to some electrical issues that they had to fix at the last minute.

Despite only having one working drive motor during the battle, “The Greatest Danger '' outlasted its competition, another melty brain robot, that stopped working within the first 30 seconds. This win led them to their next battle in the competition against the 2nd-highest ranked beetleweight robot in the world. Although they did not win this competition, they put up a great fight. They plan to start working on the next version of the “The Greatest Danger” so they can compete at the NHRL event in February 2022.

Williams added, “On paper, this event did not go as well as it could have for us, finishing with one win and one loss, but frankly we were thrilled with how it went. Facing a torrent of last minute electrical, mechanical, and code issues on an already-complex robot, we got it working in time to compete with positive outcomes from both matches. The best part is, like I mentioned before, just by going and getting in the arena we learned so much about what we can do better.”

“We couldn't have gotten this far without a lot of support from NCSU. We owe it to our faculty sponsor, Dr. Sheehy, and the EYE program, which covered our travel expenses. Solidworks licenses from NCSU and access to the ECE makerspace are also critical to this project, which we are thankful for.”