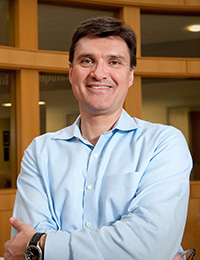 Congratulations to the Dr. George Rouskas, Director of Graduate Programs and Alumni Distinguished Graduate Professor of Computer Science at NC State, on receiving the 2019 Outstanding Service Award from the Optical Networking Committee (ONTC) of the IEEE Communications Society at the 2019 IEEE GLOBECOM conference.

This award recognizes members of the IEEE Communications Society who have a distinguished record of service to the Optical Networking Technical Committee (ONTC), providing exceptional leadership within ONTC, and promoting the ONTC activities and interests in the broader community.  Rouskas has been a member of the ONTC for over 20 years serving as secretary from 2012-2013; vice chair from 2014-2015; and chair from 2016-2017.

For more information on the Award, visit the ONTC site.