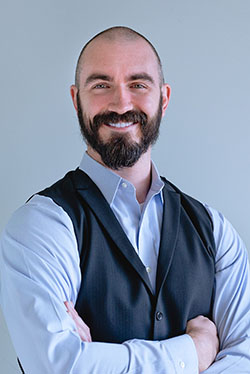 Please join us on January 28th at 6:30 p.m. in room 1231 in Engineering Building 2 as we kick off the Spring Fidelity Investments “Leadership in Technology” Speakers Series.

Our special guest speaker will be computer science alumnus Dr. Chris Hazard, co-founder and CTO of Diveplane.  Hazard’s topic will be “What Can We Learn About Innovation from the Theories That Drive Artificial Intelligence.”

Diveplane’s AI technology spun out of Hazardous Software, a company Hazard founded in 2007 that focuses on decision support, visualization, and simulation for hard strategy problems in large organizations, DoD, and government. Hazard holds a PhD in computer science from NC State, with focus on artificial intelligence for trust and reputation. He was a software architect of CDMA infrastructure at Motorola, worked on robot coordination and logistics at Kiva Systems (now Amazon Robotics), and advised NATO on cyber security policies. He has led gaming projects related to cyber security, social engineering, logistics, economics, and psychology, and is a certified hypnotist. Hazard is also known for his 2011 game Achron, which won GameSpot’s Best Original Game Mechanic award, and for his research on game design, AI, and human-computer interaction, for which he has given keynote speeches at major conferences and been featured in mainstream media.

Abstract:  Simply put, an artificial intelligence is a computer program that observes, generalizes previous observations, optimizes outcomes, explores the unknown, and subsequently performs actions. This same framework can be used to characterize many human activities, from controlling vehicles to translating spoken languages to making business decisions, which may mean many complex tasks can become automated. Nearly two hundred years worth of mathematics have contributed to our current understanding of this computational process. But more rarely are they used to examine the process of innovation. In this talk, Dr. Hazard will look through the lens of AI and mathematics to interpret the dynamics of innovations, including observations throughout history and from his career.

Can creativity be measured? How does information theory explain why both the Han Dynasty and Roman Empire had such difficulty innovating effective strategies against nomadic tribes? How does the curse of dimensionality relate to the invention of the light bulb? What can intertemporal discounting tell us about why TCP is the dominant web protocol for reliable traffic? And how do the answers to these and many other questions fit into the building blocks of AI? This talk will further provide a framework for how to think about building AI systems that innovate as well as tools to think about innovations... maybe even your own!