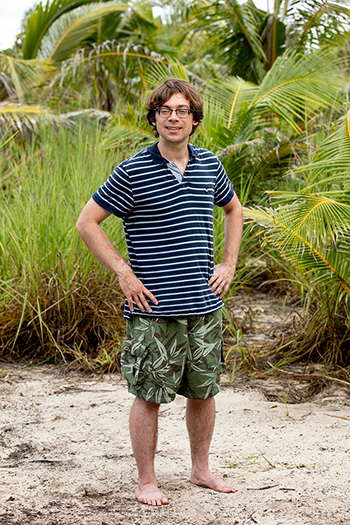 Please join us on November 19th at 6:30 p.m. in room 1231 in Engineering Building 2 for the final talk in the Fall Fidelity Investments “Leadership in Technology” Speakers Series.

Our special guest speaker will be Dr. Christian Hubicki, an Assistant Professor of Mechanical Engineering at Florida State University and the FAMU-FSU College of Engineering, and most recently, a very popular contestant on CBS’ ever-popular reality show - Survivor: David vs. Goliath.

Hubicki’s topic will be “Robotics, Survivor, and the Meaning of Control.”

As Director of the Optimal Robotics Laboratory, Hubicki’s research specializes in bipedal locomotion, specifically optimization methods that apply to both legged robotics and biomechanics. He earned both his Bachelor's and Master's degrees in Mechanical Engineering from Bucknell University, with undergraduate minors in Physics and Music.  Dr. Hubicki earned his dual-degree PhD in Robotics and Mechanical Engineering working in Oregon State University’s Dynamic Robotics Laboratory. During his doctoral work, he used optimal control tools to study the behavior of ground-running birds and control compliant legged robots – including the bipedal robot, ATRIAS, a DARPA Robotics Challenge invited demonstration. In 2015, Dr. Hubicki joined the Georgia Institute of Technology's AMBER bipedal robotics laboratory as a Postdoctoral Fellow, where he further developed control methods for legged robots. In 2017, he joined Georgia Tech's CRAB lab to explore the interaction of robotic locomotion and the physics of complex substrates. His work has been featured in numerous media outlets, ranging from the Science Channel's "Outrageous Acts of Science" to CBS's "The Late Show with Stephen Colbert."

Abstract:  Hubicki’s talk will explore lessons and concepts of modern robotics and how they apply to something so seemingly different as "Survivor." He will use lots of videos of walking robots and philosophical application to his experience on the island. He will also leverage a good dose of humor. The overall goal is to show how counterintuitive scientific lessons can have broad applications across life.