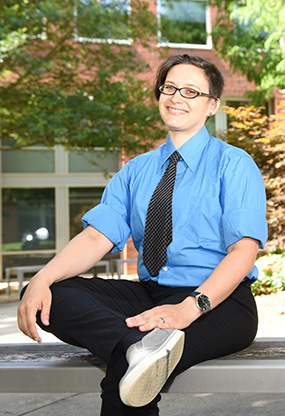 This award is one of the highest honors NSF gives to young science and engineering faculty members. NSF will provide $500,000 in funding over five years to support Martens’ project, “Explorable Formal Models of Privacy Policies and Regulations.”

The goal of the project is to enable automated reasoning over privacy policies and regulations that can assist users, policy developers and regulators in understanding consequences of data practices and policies. Data collection and analysis have become a major part of advancements in digital technology, but user expectations for what happens to their data often does not match software companies’ privacy policies and practices. Martens’ research team will be developing techniques to represent policies and regulations that formally model the logical semantics of regulations and support mechanized correctness proofs while also providing more transparency to users through the use of natural language and visualization.

Using a relational programming model known as Answer Set Programming (ASP), the project will formalize privacy policies specific to software companies as well as privacy regulations like the European Union’s General Data Privacy Regulation. New techniques for interoperating with ASP as a lightweight semantic modeling framework are also expected to be results of the research. These include support for answering queries, generating scenarios that reveal privacy loopholes, suggesting repairs for broken policies and allowing policy developers and users to explore hypothetical scenarios.

Martens received their B.S. in 2008 and Ph.D. in 2015, both in computer science from Carnegie Mellon University. Martens’ research interests include human-computer interaction and programming languages.