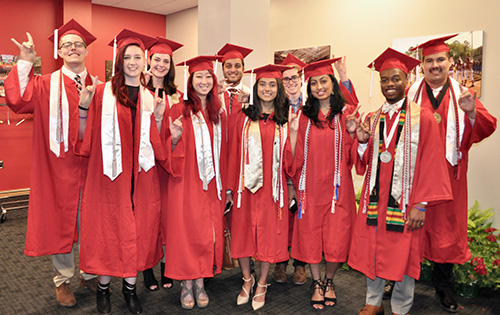 Hundreds of friends and family members gathered in the James T. Valvano Arena inside NC State’s Reynolds Coliseum to celebrate the Spring 2019 computer science graduates.  This spring’s graduating class of over 300 students included 12 Ph.D., 145 M.S., and 152 B.S. degree recipients, and was the largest graduating class in department history.

We were honored to have computer science alumnus Jim Fletcher (CSC BS 1976), a Strategy Partner with Momenta Partners, provide the keynote address.  Fletcher holds over 60 patents and is a regular speaker at conferences worldwide on a range of emerging topics.  He is a member of the NC State University Executive in Residence program and was recently inducted into the NC State University Computer Science Hall of Fame.

In his remarks Fletcher pointed out that May 10th, the date of the CSC diploma ceremony, was the 43rd anniversary of his graduation from NC State.  He talked about computer science at NC State when he was a student – using punch cards bound together with rubber bands, and long nights using “terminals” in Dabney Hall his senior year and running batch jobs on a mainframe computer called “Tuck” that was located in the Research Triangle Park (RTP) and shared by students at NC State, UNC and Duke.

He encouraged the graduates to continue to learn after graduation, saying, “In tech, if you don’t continue to learn, and you’re not willing to reinvent, you will become irrelevant.”  He added that “while some fields are fundamentally the same year after year, the tech industry seems to change daily.”  He went on to quote Steve Jobs who referred to a career as “collecting dots”.  Jobs once said you have to trust that you can connect the dots down the road.  Fletcher said that so many times the dots he collected years ago impacted how he deals with the problems at hand.  He encouraged the graduates to learn something new every day, and to go collect their dots.

He concluded his remarks by wondering which one of the graduates would return one day with gray hair (or no hair) on the 43rd anniversary of their graduation to talk to the class of 2062.

Our special thanks go to the Computer Science Department ePartners Program, its participating corporate sponsors, and the NC State Engineering Foundation for their generous sponsorship of this event.