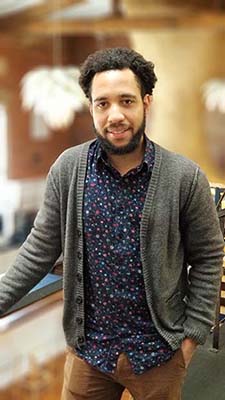 For an aspiring entrepreneur, there are many educational paths to take, and for NC State graduate DeShawn Brown, one stood out - computer science.

As the founder and CEO of Lithios, some might say Brown took an unconventional route to get to where he is today. When he arrived at NC State as a prestigious Park Scholar, he was sure about his passion for technology, art and entrepreneurship. But as for his ultimate major, he remained undecided until one particular computer science course spurred his interest.

Brown recalls that he originally enrolled in a graphics course to fulfill an elective requirement.

“That class really triggered something in me. I knew I wanted to create and build. I just didn’t know which major would help me do that,” said Brown. “I had lots of ideas, but it became obvious to me that a computer science degree could help me take an idea from concept to reality.”

Shortly after taking the class, he had the answer he was looking for, so he met with his advisor to declare computer science as his major.

A ‘people-person’ with an extensive background in theatre, Brown participated in the NC State University Theatre’s production of Little Woman, performing in 14 shows. He credits his theatrical background for his people skills he uses on the job every day.

“Through acting, I learned the fundamentals of getting the audience’s attention, holding it and delivering my message at precisely the right time,” said Brown. “I attribute many of the skills I rely on as an entrepreneur to my experience in the theater.”

As a student, Brown found himself looking for ways to combine this newfound interest in computer science with his entrepreneurial passion. He quickly made friends in his new major and formed a study group with two of his classmates. Unbeknownst to them, this study group would one day become a leading mobile application development firm in the Research Triangle.

The firm’s name, Lithios, combines the element Lithium, which is used in batteries for long-lasting and powerful results, with the team’s original passion for iOS (Lithium + iOS). Lithios prides itself on its core beliefs: creativity, innovation, transparency, entrepreneurship and community.

Lithios’ core beliefs are central to who Brown is as a developer, entrepreneur and person. His passion is apparent in everything he does from his interactions with others to the quality of product his firm produces.

However, Lithios is not Brown’s first endeavor. While at NC State, Brown worked on a variety of entrepreneurial projects, including a ride share application called Campus Cruiser. The popular app was used by students for about a year, but it was quickly replaced by the disruptive Uber app.  While disappointed, Brown viewed this not as a failure, but rather an opportunity to learn and grow as an entrepreneur.

“Campus Cruiser taught me that college students will always pick what’s quickest, cheapest and most convenient,” he said. “They aren’t always worried about brand loyalty like older demographics.”

Among his many other developments is an application similar to a combination of Snapchat and FlappyBird. It was his team’s first viral application reaching 7,000 downloads in the first few weeks. Brown said the app eventually shut down because his team wasn’t ready to effectively market the product. He chalked this up as another learning opportunity.

A self-proclaimed “Champion for Computer Science and Entrepreneurship,” Brown aspires to act as an example for others interested in his career path, and encourage them to explore the combinations’ endless possibilities.

“I’m super excited about the recent announcement of a new Entrepreneurship Track in the CSC Undergraduate Program,” said Brown. “I think this is going to be a huge draw for others like me to the NC State and the Computer Science department.”

Brown’s office is located in HQ Raleigh, a co-working space in Raleigh that houses a variety of entrepreneurial ventures. The collaborative spirit and exciting energy of start-ups fuel Brown’s hunger for innovation and pushes him to create at the same caliber as his previous ventures, all while growing and learning.

And that’s the path to success he takes to work each day.