In May 2018, North Carolina State University and IBM announced a new partnership in quantum computing, with NC State becoming the first university in North America to establish an IBM Q Hub as part of the global IBM initiative in this area.

“The goals of the Hub are to advance fundamental research in quantum computing and to explore practical applications important to business, science and engineering,” says Patrick Dreher, Chief Scientist at the IBM Q Hub at NC State.

Prof. Dreher is a Research Professor in NC State’s Department of Computer Science and an Associate Faculty in the Department of Physics. His article below relates how researchers at the Hub are exploring ways that quantum computers can outperform traditional conventional computers. “They are now immersed in the exciting work of developing new applications and computer codes for this new quantum computing technology,” he tells the NC State Poole College of Management’s Center for Innovation Management Studies (CIMS) “Innovation Management Report (CIMS IMR).” 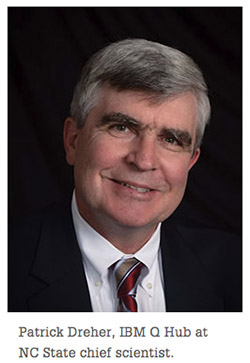 functionalities like web browsers and e-mail up through specialized high-performance computing.

Over the past decade many scientists and engineers have begun experimenting with a different type of computational paradigm. This paradigm is based on the idea of modeling a computational system using the laws of quantum mechanics rather than the mathematics of binary numbers for doing computations. Machines that operate on this system are called quantum computers.

Unlike conventional computers, the basic unit of computational information in a quantum computer is the qubit (from “quantum bit”). Unlike the bit, which is clearly defined and measured as either a 0 or 1, the qubit has no equivalent classical analog.

Quantum mechanics allows the qubit to exist in complex mixtures of both a “zero” and “one” state at the same time. It is this superposition property plus another property of quantum mechanics called entanglement that provides the quantum computer with the potential for exceeding the computational capabilities of a conventional computer for certain types of problems.

IBM, IonQ, Rigetti, D-Wave, Google, Microsoft, and other companies have begun concerted efforts to build quantum computers that will operate based on these quantum mechanics principles. Today many of these companies have produced the first generation of these new types of computational platforms.

These devices are now allowing researchers to explore new ideas, algorithms and applications, and to also reformulate conventional computational codes so that they can run efficiently on quantum computing systems.

IBM has established the IBM Q Experience outreach program as a cloud-based online initiative designed to promote access to quantum computers. The program encourages users to access both the IBM quantum computing simulator for developing code and several first-generation quantum computers for testing and running these codes.

IBM offers several levels of sophistication for IBM Q Experience users. The introductory level for public access to quantum computing is through the quantum simulator. This is a GUI-based software called the Quantum Composer. The graphical user interface has been designed to allow users to graphically construct various quantum algorithms.

The Composer can transform graphical representations of the user’s time-ordered sequence of operations into code that can then either be run on the quantum simulator or the 5-qubit IBM quantum computing hardware platform.

As users become more familiar with how to program a quantum computer, IBM has also provided software called Open Quantum Assembly Language (OpenQASM). This is an intermediate representation for quantum instructions. The source code was released as part of IBM’s Quantum Information Software Kit (QISKit). Programmers can use this software kit

to develop their codes.

The actual codes are usually constructed within Jupyter Notebooks using Python, Swift or Java code. Qiskit is based on the OpenQASM standard for representing quantum circuits, and will support pulse-level control of quantum systems as specified by the OpenPulse standard that controls the detailed qubit manipulations within the actual quantum computing hardware platform. 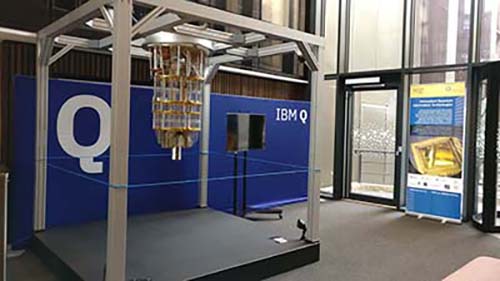 To support user access to these capabilities, IBM also established the IBM Q Network as a worldwide organization of companies, academic institutions and national research labs pursuing practical applications of quantum computing. The goal is to significantly increase the

Within the IBM Q Network IBM has created engagement levels of Hubs, Partners and Startups:

As an IBM Q Hub, NC State has access to the full range of IBM Q Experience resources described above. Hub membership also provides special access to the largest and most advanced quantum computing hardware platforms, including the 20-qubit IBM Q system and soon-to-be-

With access to these resources in place, NC State has focused on implementing three initiatives at the Hub:

The IBM Q Hub at NC State is ramping up its activities this semester. NC State faculty from Computer Science, Mathematics, Electrical and Computer Engineering and the Physics Departments have already presented quantum computing courses on campus. Short courses are also being developed at the Hub and a seminar program and public educational lectures are being planned on campus for the Spring and Summer 2019 semesters.

Several NC State faculty have already utilized their access to the 20-qubit machine for research work. Additional research collaborations are planned to access the machine during the spring semester.

Several companies have approached NC State inquiring about the IBM Q Hub and the Industrial Partner programs. The University is in detailed discussions with these corporations about becoming Industrial Partners at the NC State IBM Hub.