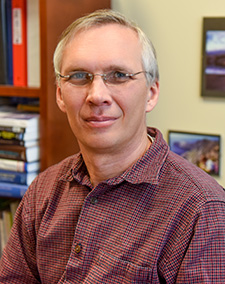 Dr. Frank Mueller, professor of computer science, was recently named a 2018 Association for Computing Machinery (ACM) Fellow for his contributions to the predictability of real-time systems, resilience in high-performance computing and multi-threading techniques.

Mueller is the first faculty member in the Computer Science Department at NC State to be recognized with this distinguished honor.

ACM Fellows are composed of an elite group that represents less than 1% of the Association’s global membership.  ACM named 56 members Fellows for their significant contributions in areas including computer architecture, mobile networks, robotics and systems security. According to the ACM, “The accomplishments of the 2018 ACM Fellows underpin the technologies that define the digital age and greatly impact our professional and personal lives.”

Fellows hail from universities, companies and research centers in Finland, Greece, Israel, Sweden, Switzerland, and the US.  They have been cited for numerous contributions in areas including accessibility, augmented reality, algorithmic game theory, data mining, storage, software and the World Wide Web.

In addition to being named an ACM Fellow, Mueller has received numerous awards and recognitions including being named an Institute of Electrical and Electronics (IEEE) Fellow in 2016; a member of the IEEE Golden Core in 2012; and an ACM Distinguished Scientist in 2011.

Mueller joined the NC State Computer Science Department in 2001.  He earned his BS from the Technical University of Berlin, and his MS and PhD from Florida State University in 1991, and 1994 respectively.

ACM will formally recognize its 2018 Fellows at the annual awards banquet, to be held in San Francisco on June 15, 2019.  Additional information about the 2018 ACM Fellows, the awards event, as well as previous ACM Fellows, is available on the ACM Fellows site.