This spring’s graduating class included many remarkable students including: 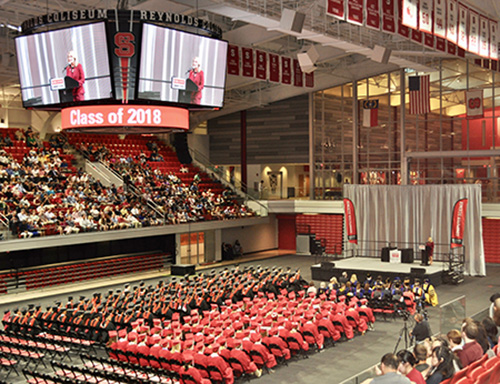 We were honored to have Kimberly Calhoun serve as the keynote speaker. Calhoun is the COO of MoneyMasters TV and Network, CEO and Founder of CAP Science Labs, and inventor of Guardianator.  She is also a member of the NC State Computer Science Department’s Strategic Advisory Board (SAB).

In her remarks, Calhoun encouraged the graduates to “plan, prepare and execute with excellence” everything they do in life.  She went on to say that “when we solve the world’s problems, sometimes we create other problems, but don’t let that stop you from innovating.  Learn from that, grow from it, and continue to innovate…”  Calhoun concluded her remarks by quoting the former NC State basketball coach Jimmy Valvano’s famous speech telling the graduates: “Don’t give up.  Don’t ever give up!”

Our special thanks go to Bank of America, the Computer Science Department ePartners Program, its participating corporate sponsors, and the NC State Engineering Foundation for their generous sponsorship of this event.