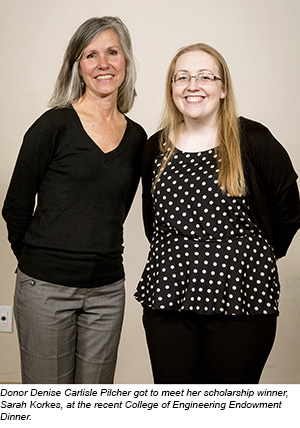 The rising costs of a college education can be quite a burden on students and their families. Scholarship funds help bridge the gap, helping the department supplement funding for students with the greatest financial need, while also providing funds that help attract top talent.

Scholarship funds can come from outright annual gifts from alumni and corporations, or from endowments. Endowed scholarships are the most coveted source of scholarships because they are essentially ‘forever’ scholarships. They are made possible by large gifts by generous donors that are invested, with the annual growth providing the funding for student awards. In theory, an endowed scholarship will provide awards in perpetuity.

Scholarships are usually designated by the donor as ‘needs-based’ and/or ‘merit-based’. In addition to naming their endowments, donors often elect to establish ‘preferences’ as to how the awards are to be distributed. These preferences are often aligned to the donors’ passions or special interests. While it is not always possible for the awards to be given to a direct match, the department always strives to make scholarship awards with the donors’ preferences in mind.

Our 2017-18 endowed scholarship awards include:

Ken Tate, director of engagement & external relations, says the number of endowed scholarships within the department of computer science has more than quadrupled in the last decade. "We have added 19 new fully funded scholarship endowments over the last decade and another three have been committed as part of planned estate gifts," says Tate. While this growth in endowments is impressive, the 23 recipients represent less than 3% of the undergraduate population in computer science. "We are only scratching the surface in terms of meeting the demand for 'needs-based' and 'merit-based' scholarships," says Tate."

According to Kyle Kremer, director of development for the department, adds that the minimum requirements to establish a scholarship endowment are increasing from $25,000 to $50,000 on May 15, 2018. “For anyone who has been thinking about creating a named endowment, now is the time to do so in order to take advantage of the lower level,” says Kremer. Endowments can be created in many different ways and forms including: a single outright gift, a multi-year pledge, or they can be created as a part of a person’s estate plans. They can also be created with gifts of stocks, securities, or properties.

Those who are interested in giving to one of the currently established endowments or creating your own, contact Kyle Kremer (klkremer@ncsu.edu).