The Department Welcomes Dr. Maria Klawe for a Special Talk 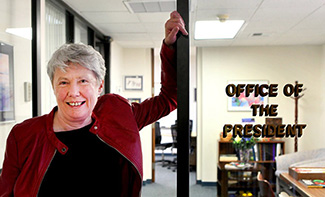 Please join us on November 20th at 4 p.m. in the Hunt Library Auditorium for the final talk in the Fall 2017 Fidelity Investments “Leadership in Technology” Speakers Series.  This special talk is co-hosted with Triangle Computer Science Distinguished Lecture Series and the NC State CS Theory Seminar Series.

Our special guest speaker will be Dr. Maria Klawe, president of Harvey Mudd College.  Her talk topic will be “Broadening Participation in Computing.”

Maria Klawe is the president of Harvey Mudd College. Prior to joining HMC, she served as dean of engineering and professor of computer science at Princeton University. She also held positions at the University of British Columbia, IBM Research in California, and the University of Toronto, subsequent to earning her PhD in mathematics from the University of Alberta.

Klawe is also a renowned lecturer and has given talks at international conferences, national symposia, and colleges across the U.S. and Canada about diversity in science, technology, engineering, and mathematics disciplines and industries, gender and gaming, and lessons from her own career in STEM industry and education. She has devoted particular attention in recent years to improving K-12 science and mathematics education. Dr. Klawe serves as a board member of the nonprofit Math for America, chair of the board of the nonprofit EdReports.org, a fellow of the American Academy of Arts & Sciences, a trustee for the Mathematical Sciences Research Institute in Berkeley and a member of the Canada Excellence Research Chairs Selection Board.

Klawe is the recipient of numerous awards and honors, including the 2014 Women of Vision ABIE Award for Leadership and being ranked 17th on Fortune’s 2014 list of the World’s 50 Greatest Leaders. In 2015 she was honored with the Lifetime Achievement Award from the Canadian Association of Computer Science and the Achievement Award from the American Association of University Women, and she was inducted into the US News STEM Solutions Leadership Hall of Fame. She was honored by the Computing Research Association with the 2016 Distinguished Service Award.

Abstract:  Computing is one of the least diverse disciplines in science and engineering in terms of participation by women, African-Americans and Hispanics, and the only discipline where participation by women has significantly decreased over the last three decades. While our discipline does well in encouraging members of underrepresented groups to go on to graduate programs, we have been less successful in attracting members of these groups into undergraduate programs. This talk discusses successful strategies for significantly increasing the number of women and students of color majoring in computer science.

The event is free and open to the public.  For directions, parking and more information, click here.