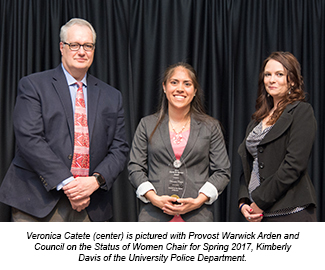 Congratulations to Veronica Catete, a PhD student in the NC State Computer Science Department, on recently receiving the 2017 Equity for Women Award in the student category during the Sisterhood Dinner on Monday, February 27 in the Talley Student Union.
The Equity for Women Award is made annually to recognize faculty, staff and students for their outstanding leadership in establishing equity for women at NC State.  Nominees are evaluated based on demonstrated excellence in one or more of the following areas over the past twelve months:

Some highlights from Catete’s nomination letter include: “In her freshman year Veronica was a University Scholar where she met other students who were also committed to building cultural awareness, diversity, and academic inclusion.  She observed that both gender diversity and racial diversity were low in the Computer Science Department.  She immediately began supporting other CSC students through peer tutoring, mentoring, and community outreach.
“In her sophomore year, Veronica joined the STARS Computing Corps, a student leadership development program focused on broadening participation in computing.  Veronica has been a member of STARS for over seven years now, and was President from 2013-2016.  Veronica created the STARS tutoring program for CSC 116 and 216 students, which serves as the main tutoring program for introductory computer science students.  That year Veronica also became the leader for the STARS middle school Saturday computing academy program, called SPARCS, and has since grown it to an award-winning program (Centennial Campus Partners Award).

“Veronica is also a leader in scholarship.  She is pioneering CSC education research, creating rubrics that may revolutionize the way that CSC educators assess student work, making it more equitable and fair to novice learners.  Veronica has received highly selective, nationally competitive scholarships to fund her graduate work.  She is a Microsoft Graduate Women’s Research Scholar and a National Science Foundation (NSF) Graduate Research Fellow.  She has completed over 500 hours of community outreach and service while maintaining academic rigor.
“In 2016 alone, Veronica planned and implemented four new programs for women.  Veronica planned and lead the 2016 Lady-Wolf-App-A-Thon, our department’s premiere recruiting event for early admission female candidates.  She helped organize Eastman Chemical’s Fall 2016 Sit With Me Event bringing together industry leaders, campus organizations, and faculty to raise awareness of the need for gender equity in computing for over 300 attendees from across campus.  She created a new high school computing outreach program, Females Learning Awesome Math, Engineering and Sciences (FLAMES).  Veronica trains undergraduate and graduate women to lead these sessions.  She encourages and supports this new team of leaders in creating inspiring and innovative experiences.
“In 2016, Veronica designed and implemented the Pivot Academy project to train students and teachers in Byimana, Rwanda, to use tablets to bring interactive science simulations and experiments to the Groupe Scolaire Notre Dame de Lourdes (GSNDL). GSNDL is a 600-person all-girls Catholic boarding school, with no funds to build labs to support learning science.
“In summer 2016, Veronica spent six weeks in Rwanda. The first week was a one-week immersion program, where Veronica taught over 80 girls how to use tablets in hands-on, constructive learning; leading students through the idea, creation, and testing process of developing entrepreneurial apps for change. In the next 5 weeks Veronica mentored over 150 personal student projects and trained GSNDL teachers to use tablets to teach science through interactive simulations and experiments. Veronica trained local university faculty to run the program and met with the Rwanda Education Board and the Ministry of Youth and ICT to secure partnerships for continued growth and replication of Pivot Academy.
“There are literally hundreds of students (if not thousands) who have personally attended workshops that Veronica has taught, over the last 7 years. This is particularly important, as computing is a critical 21st century skill that is not being made equitably available to people.”
The 2017 Award winners are:  Faculty – Dr. Kate Annett-Hitchcock; Staff – April Schaeffer; Student – Veronica Catete.  For more information on the Equity Awards and the 2017 Sisterhood Dinner, click here.
~coates~