A Big Hit With Students, Pokemon GO Hits the Classroom 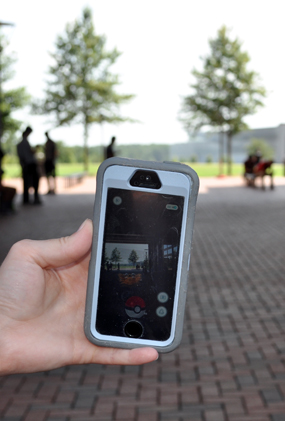 Pokemon GO, a mobile-based reality game in which players try to capture Pokemon characters that appear throughout the real world, is not only a big hit with NC State students, but has also hit the classroom.  Less than one week after the game’s official U.S. release, Scott Carpenter, an NC State Computer Science PhD student and instructor, incorporated the game concepts in the summer course he is teaching, CSC 316 – Data Structures for Computer Scientists.
“In class, we just finished covering preliminary graph theory and path-finding algorithms,” says Carpenter, “when I learned from my own children about the explosive popularity of Pokemon GO that was happening over the weekend.  I felt many concepts were definitely related to what my students had been studying and I had to find a way to bring this excitement into the classroom.”
Carpenter did so the very next time his students met for class by explaining how Pokemon GO leverages not only the data structure concepts that the summer students are learning about in his class, but also how the systemic nature of the game relies on many important computer science concepts.  With hand-drawn charts and diagrams and a lot of interactive classroom discussion about networking, location services, security and privacy, Carpenter explains, “Pokemon GO requires real-time data collection from millions of mobile users and the use of crowdsourcing techniques to determine when and where to spawn new Pokemon.”
To play the game, players must physically move around throughout their real world in order to “find” the imaginarily nearby Pokemon that each can “see” using the app on their mobile devices.  Worldwide data usage continues to increase very rapidly, and the total daily data usage has been predicted to soon outpace popular social media sites such as Twitter.  The results of playing the game often encourage players to get out and find nearby Pokegyms and gather at Pokespots where they encounter other gaming enthusiasts.  Not all nearby players see exactly the same Pokemon characters, although sometimes they do, implying that the Pokemon distribution algorithm itself may be partly decentralized and partly distributed.
“The effects of Pokemon GO on influencing human behavior would be interesting to study,” says Carpenter.  “I’ve already seen it have a tremendous impact on my own children within the first few days of its launch.  It’s summer, and my kids are asking to go outside and take walks and do physical activity in 90 degree weather during what would otherwise likely be a very lazy summer time.  So, now, if one of my students comes into class a few minutes late, I’ll just assume they’ve been out hunting Pokemon.”
###