In Gaming, Player Behavior Reflects Roles – Even when No Roles Are Given 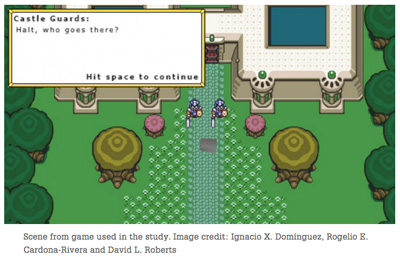 New research from North Carolina State University finds that player behavior in narrative role-playing games (RPGs) reflects specific character roles – even if the game tells players nothing about the character’s role. The finding is relevant to both game designers and gaming researchers who study player behavior in RPGs.
“We wanted to know how, if at all, having a role influenced player behavior,” says Ignacio Domínguez, lead author of a paper on the work and a computer science Ph.D. student at NC State. “We also wanted to know if it mattered whether the role was assigned versus selected by the player.
“We found that people’s behavior was consistent with their role, regardless of whether it was assigned or chosen,” Domínguez says. “What’s more, we found that people’s gameplay was consistent with a single role even if they didn’t have one. In other words, people exhibit consistent, role-based behavior even if they are given no information about what their role should be.”
For the study, researchers created a simple, single-player RPG. The RPG is a visual, interactive narrative game, but offers no cues about the physical attributes of the player character. (The game can be found online at http://go.ncsu.edu/ixd-demo-rpg).
The researchers had 210 people play the game, and tracked their gameplay. Seventy-eight players were assigned to one of three roles: fighter, mage, or rogue; 91 players were allowed to choose from the three roles; and 41 players were given no role – they simply began gameplay.
The gameplay consisted of not only moving the character through the game environment, but also making a dozen multiple choice decisions about the character’s actions in an unfolding fictional narrative.
Each option within every multiple choice decision was designed to be consistent with one of the three character roles. For example, when players are asked to select a weapon, they can choose from an axe (which is consistent with the “fighter” role), a staff (mage), or a set of daggers (rogue). 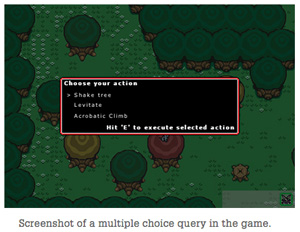 After evaluating the players’ decisions, researchers found that – whether roles were assigned or chosen – player behavior was very consistent with their explicit roles. Players, with fighter roles, for example, chose the “fighter” options on decision-making tasks 65.7 percent of the time. Mages chose the “mage” options 76.1 percent of the time, while rogues chose the “rogue” options 69.7 percent of the time.
“The results strongly support the idea that players make choices based on their character’s role, even if they didn’t pick the role,” says David Roberts, an assistant professor of computer science at NC State and senior author of the paper. “And we were careful, when creating the game, to validate the role descriptions we provided to players, as well as validating that all of the gameplay options were perceived consistently with the relevant roles.” That validation process was done in an earlier study that included 231 study participants.
The researchers also assessed the gameplay of players who were given no information about their characters’ roles, to see if player decisions tended to be consistent with a role anyway. They did this using cluster analysis, which told them how often player decisions tended to cluster around a specific role.
“We found that, even when players were not explicitly given a role, participants still role-played,” says Rogelio Cardona-Rivera, co-author of the paper on the work and a computer science Ph.D. student at NC State. That is, players who were told nothing about their character still tended to make gameplay decisions as if the character had been specifically defined as a fighter, mage or rogue.
“Our study is also interesting from a narrative perspective, because it sheds light into how players cast themselves as characters in an unfolding narrative during gameplay,” Cardona-Rivera says.
“Our findings could have two main uses,” Domínguez says. “First, it tells game designers that they may want to focus their content development efforts on actions consistent with character roles, and spend less time on content that players are unlikely to use.
“Second, the study highlights the fact that researchers studying gaming and player choice need to account for roles within games, or else their findings may be skewed,” Domínguez says.
The paper, “The Mimesis Effect: The Effect of Roles on Player Choice in Interactive Narrative Role-Playing Games,” will be presented May 11 at the ACM Computer-Human Interaction conference in San Jose, Calif. The paper was co-authored by James Vance, who participated in the work while an undergraduate at the University of Wisconsin-Stout. The work was supported by the Department of Energy under grant number DE-FG02-97ER25308. Vance’s participation was made possible by the National Science Foundation’s Research Experiences for Undergraduates program under grant number 1262899.
-shipman-
Note to Editors: The study abstract follows.
“The Mimesis Effect: The Effect of Roles on Player Choice in Interactive Narrative Role-Playing Games”
Authors: Ignacio X. Domínguez, Rogelio E. Cardona-Rivera, and David L. Roberts, North Carolina State University; James K. Vance, University of Wisconsin-Stout
Presented: May 11, ACM Computer-Human Interaction conference, May 7-12, San Jose, Calif.
DOI: 10.1145/2858036.2858141
Abstract: We present a study that investigates the heretofore unexplored relationship between a player’s sense of her narrative role in an interactive narrative role-playing game and the options she selects when faced with choice structures during gameplay. By manipulating a player’s knowledge over her role, and examining in-game options she preferred in choice structures, we discovered what we term the Mimesis Effect: when players were explicitly given a role, we found a significant relationship between their role and their in-game actions; participants role-play even if not instructed to, exhibiting a preference for actions consistent with their role. Further, when players were not explicitly given a role, participants still role-played – they were consistent with an implicit role – but did not agree on which role to implicitly be consistent with. We discuss our findings and broader implications of our work to both game development and games research.