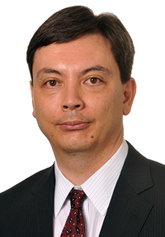 The North Carolina State Institute for Advanced Analytics is delighted to announce the appointment of Dr. Christopher Healey to the Goodnight Distinguished Professorship in Advanced Analytics. Healey is a noted scholar in the field of data visualization and visual analytics—specifically the development of methods for visualizing large, multidimensional datasets to support rapid and accurate exploration, analysis, validation, and discovery. A member of the faculty in the Department of Computer Science at NC State, Healey has been actively involved in the Master of Science in Analytics (MSA) degree program since the Institute’s inception in 2006.
“Dr. Healey is a first rate scholar, gifted teacher and valued colleague,” said the Institute’s director Dr. Michael Rappa. “His appointment as the Goodnight Distinguished Professor is a tribute to Dr. Healey’s talent and dedication to creating and sharing knowledge with students. We’re fortunate to have him participate full-time as a member of the Institute’s community.”
Healey’s appointment comes as the second of three endowed faculty positions at the Institute named in honor of the University’s distinguished alumnus and prominent business leader Dr. James Goodnight. The Institute’s founding director and Distinguished University Professor, Dr. Michael Rappa, was named to the Goodnight Directorship of the Institute for Advanced Analytics in January 2015.
Healey received a B.Math from the University of Waterloo in Waterloo, Canada, and an M.Sc. and Ph.D. from the University of British Columbia in Vancouver, Canada.
-###-