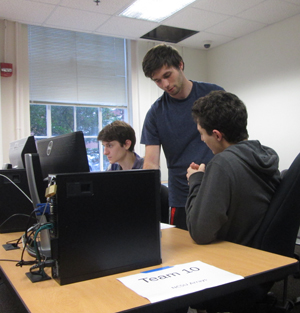 The top-placing team from NC State finished fifth in a field of 185 teams from nearby states, including 11 teams from Duke University, 10 teams from UNC, four from the University of Maryland and one from the University of Pennsylvania.
The contest presented teams with seven programming problems, challenging the three-student teams to solve as many as they could in five hours. All of the NC State teams managed to solve at least two of the problems, with the highest-ranked team solving five. The top-ranking teams from this contest will advance to the ICPC World Finals in Phuket, Thailand this spring.
Congratulations to the four NC State teams on such a strong showing at the regional contest.  The NCSU Arrays, finishing 5th in the competition, was the top placing team at the NC State site, solving five of the seven problems.  Team members are Sean Kramer, Nathan Shirley and Ryan Upham.
The NCSU Heaps finished 22nd, solving four problems.  Team members are Joshua Cook, Hengxuan Li, and Semion Piskarev.
The NCSU Graphs finished in 65th place, solving two problems.  Team members are Carl Hiltbrunner, Yang Ho, and Jorge Ramos Ruiz.
The NCSU Trees finished in 71st place, also solving two problems.  Team members are Adam Crowell, Kai Presler-Marshall, and Chi-Han Wang.
The teams would like to thank their sponsors:  Blue Cross Blue Shield of North Carolina, Boeing, Allstate, Applied Systems, PointSource, the Computer Science Department ePartners Program, and the NC State Engineering Foundation.
The ACM ICPC is a multi-tier, team-based programming competition sponsored by IBM.  It operates under the auspices of ACM and has its headquarters at Baylor University in Waco, Texas.  The contest fosters creativity, teamwork, and innovation in building new software programs, and enables students to test their ability to perform under pressure.  It is the oldest, largest and most prestigious programming contest in the world.
For a complete list of rankings, please click here.
~coates~