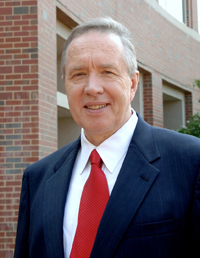 Dr. Louis Martin-Vega, Dean of the College of Engineering, recently announced that Dr. Mladen A. Vouk has been promoted to Distinguished Professor in Computer Science at NC State.  Vouk is a Professor of Computer Science, Head of the Department of Computer Science, and Associate Vice Provost for Information Technology at NC State.  He recently served as Interim Vice Chancellor for Research, Innovation and Economic Development.
Vouk is a highly respected computer scientist and IEEE Fellow who has received both the IEEE Distinguished Service Award and the Golden Core Award. He has also authored more than 300 publications, and has conducted groundbreaking research in software engineering, scientific computing and analytics, information technology and education, and high-performance computing. He is a member of a multidisciplinary team that developed the Virtual Computing Lab at NC State, one of the first cloud computing systems.
“I am delighted that Mladen has received this very special recognition which highlights his outstanding commitment and achievements as a researcher and educator in addition to his outstanding and selfless service as CSC department head and more recently as the Interim Vice Chancellor for Research, Innovation and Economic Development at NC State,” said Dean Martin-Vega.
Vouk received his PhD from King’s College, University of London, UK, and a master’s degree in computer science from NC State.  He has extensive experience in both commercial software production and academic computing. His research and development interests include software engineering, scientific computing and analytics, information technology (IT) and education, and high-performance and cloud computing. He has extensive professional visibility through organization of professional meetings, membership on professional journal editorial boards, and professional consulting. Vouk is a member of the IFIP Working Group 2.5 on Numerical Software, and a recipient of the IFIP Silver Core award. He is a member of several IEEE societies, and of ASEE, ASQ (Senior Member), ACM, and Sigma Xi.