Four from the College of Engineering Win Outstanding Senior Awards 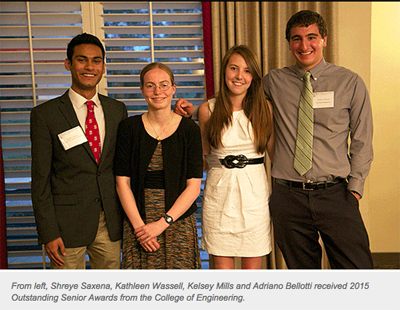 The College of Engineering at North Carolina State University presented the 2015 Outstanding Senior Awards to four exceptional students chosen from multiple nominees in the categories of Leadership, Citizenship and Service, Scholarly Achievement and Humanities.
The winners and nominees were honored during a banquet held by the College and the Engineers’ Council on May 6 at the North Carolina State University Club.
Kelsey Mills, a member of the Department of Electrical and Computer Engineering (ECE) was selected as the winner of the Senior Award for Leadership. In addition to maintaining a strong academic record, she has demonstrated a commitment to the service of both the university and her fellow students during her time at NC State. Mills is the recipient of multiple scholarships including the David P. Harris Sr. scholarship and was a 2013 finalist for the Leader of the Pack award. She has participated in NC State’s student government since she was first elected as a freshman to the Student Senate as a representative of the College of Engineering and has held multiple positions, including student senate president and vice president of the student body.
Shreye Jogendra Saxena, a member of the ECE department, was selected as the winner of the Senior Award for Citizenship and Service. Saxena, who has used his passion for service to start a nonprofit project called Pennies 4 Progress and undertake other volunteer missions both locally and across the globe, maintained a 4.0 GPA while obtaining his degree and a minor in business administration. In addition to his service, he has worked with Cisco Systems and Deloitte Consulting and has participated in undergraduate research with the National Science Foundation (NSF) FREEDM Center and the Department of Microbiology.
Adriano Bellotti, a member of the joint NC State/UNC Department of Biomedical Engineering (BME) was the winner of the Senior Award for Scholarly Achievement as a result of his outstanding academic performance, excellent work in research and contributions to the NC State community. A unanimous nominee of the BME Undergraduate Affairs Committee, he also earned a minor in biological sciences and has undertaken extensive undergraduate research with faculty members at NC State and Ohio State. Bellotti has also been involved with Engineering World Health during his time at NC State and has been the club’s president for the last two years.
Kathleen (Katie) Wassell was selected as the winner of the Senior Award for Humanities. Pursuing both a computer science degree with a concentration in game development in the Department of Computer Science and a creative writing degree in the Department of English, Wassell has maintained 4.0 GPAs in both of her majors. Her interests stand at the intersection of the humanities and computer science. As her supervisor during a co-op at Oracle put it, “Katie has left-brain logic and right-brain creativity all in one driven student.”
Other nominees for the awards were:
LEADERSHIP
Carmelina Pappalardo, Civil, Construction, and Environmental Engineering
Steven Michael Plante, Chemical and Biomolecular Engineering
Michael Scipione, Textile Engineering
Anant Singhal, Nuclear Engineering
Aaron Srivastava, Biomedical Engineering
Rebecca Stubbs, Biological and Agricultural Engineering
James D. Turner, Mechanical and Aerospace Engineering
CITIZENSHIP AND SERVICE
Megan Fruchte, Biological and Agricultural Engineering
John Holmes, Civil, Construction, and Environmental Engineering
Elliott N. Locke, Chemical and Biomolecular Engineering
Paige Maxon, Biomedical Engineering
Xavier Primus, Computer Science
Michael Suguitan, Mechanical and Aerospace Engineering
SCHOLARLY ACHIEVEMENT
Michael Burroughs, Chemical and Biomolecular Engineering
Rachel Chapla, Textile Engineering
Justin Cody, Nuclear Engineering
John Mangum, Materials Science & Engineering
Joshua Rudd, Biological and Agricultural Engineering
Sara Troutman, Civil & Environmental Engineering
Alexandria K. Vail, Computer Science
Katherine D. Walker, Electrical and Computer Engineering
HUMANITIES
Sarah J. Bucher, Biological and Agricultural Engineering
Mary George, Mechanical and Aerospace Engineering
Catherine A. Longo, Chemical and Biomolecular Engineering
Alexandre Mangot, Civil, Construction, and Environmental Engineering
Daniel A. Needs, Biomedical Engineering
William T. Stepp, Electrical and Computer Engineering
~###~