Thursday, November 13
James Goodnight, Co-founder and CEO, SAS
Topic:  “An Epic Entrepreneurial Journey:  How Creating a Unique Culture for Innovation Leads to Unlimited Possibilities”
(Note:  This talk will take place in the Auditorium of the James B. Hunt Library.)
Dr. Mladen Vouk, professor and department head, comments, “For the past seven-plus years, Fidelity Investments has supported this speaker series which continues to bring influential industry leaders and professionals to campus.  We appreciate the support that Fidelity Investments provides not only to the series, but also to the NC State Computer Science Department." 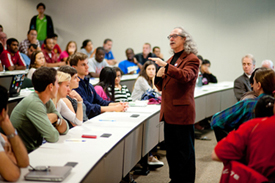 Created and hosted by the NC State Department of Computer Science, the Fidelity Investments "Leadership in Technology" Speakers Series was created to provide students of all disciplines, as well as the extended university and business community, exposure to the unique world of leadership in technology.
The series, launched as a part of the computer science department's 40th Year Celebrations in 2007 and made possible by a generous donation by Fidelity Investments, features accomplished and highly recognizable entrepreneurs, leaders and executives to speak on a variety of technology-focused leadership topics. The variety and quality of the speakers has resulted in the series quickly becoming known as one of the premiere speakers series on campus.

All talks are scheduled to take place at 6 pm in Room 1231 in Engineering Building 2 (EB2) (unless noted otherwise), the department's state-of-the-art research and teaching home on NC State's award-winning Centennial Campus.

Each talk is free and open to the public. Free parking is available in the deck on Partners Way. (directions & map).