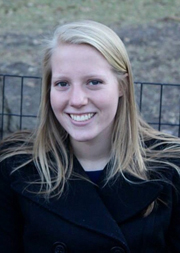 The NC State Computer Science Department is pleased to announce that Melissa Novitsky, a recent graduate of Athens Drive High School in Raleigh, is the recipient of the 2014 NC State Computer Science Aspirations Scholarship Award.
The NC State Aspirations Scholarship Award was launched last year in conjunction with the National Center for Women in Technology (NCWIT).  The award is to be given annually to a high school student who wins a national or regional NCWIT Aspirations in Computing Award, and who attends NC State University to pursue a degree in computer science.  The $1,000 scholarship is renewable for a total of four years as long as the student maintains acceptable academic progress toward a B.S. degree in computer science.
Novitsky considers winning the NC State Aspirations Scholarship Award an honor and a blessing, and she is looking forward to studying computer science at NC State this fall.  She says, “I decided to pursue a computer science degree after taking AP Computer Science A while in high school.  My initial interest was because the class was so unlike every other; we made robots and cool programs, and it was just plain fun.  I knew I wanted to continue computer science because of the challenge and reward I experienced while creating programs – that is something I need in my life.”
The NCWIT Award for Aspirations in Computing builds a talent pool for the growing technical workforce and helps academic and corporate organizations celebrate diversity in computing by honoring young women at the high school level for their computing-related achievements and interests.  Award recipients are selected based on their aptitude and aspirations in technology and computing; leadership ability; academic history; and plans for post-secondary education.
~coates~