Dogs, Technology and the Future of Disaster Response 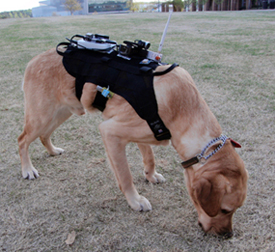 Imagine a team of humans, dogs, robots and drones swooping onto the scene in the aftermath of a disaster and working together to find and rescue anyone trapped in collapsed buildings. That’s the goal of a team of researchers from around the United States working on what they call the Smart Emergency Response System (SERS).
The team is part of the Smart America Challenge, which kicked off in late 2013 to highlight state-of-the-art, practical innovations stemming from U.S. research. The SERS team is one of more than 20 research groups presenting projects as part of the challenge.
The SERS project’s goal is to use cyber-physical systems to share information and coordinate emergency and disaster response and recovery. These systems are designed to work in real-time via a variety of wireless network technologies.  In addition to NC State, the SERS team includes researchers from MathWorks, the University of Washington, MIT, BluHaptics, National Instruments, the University of North Texas, Boeing and Worcester Polytechnic Institute.
The NC State researchers, Alper Bozkurt and David Roberts, are focused on a very specific aspect of the SERS equation: dogs.
Roberts and Bozkurt have developed a high-tech harness equipped with sensors and other devices that will both make the dogs more effective at collecting information and incorporate the dogs into the larger network of a coordinated disaster response.
“We’re using a range of technologies to modify off-the-shelf harnesses,” Bozkurt says. “And of course, all of the tech is supplemented by training for the dogs and their handlers.”
“We’re not trying to replace dog handlers – we’re trying to open the door to new possibilities,” says Roberts, who is also an experienced amateur dog trainer. 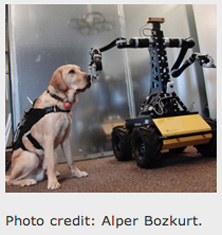 The SERS dog harnesses include three kinds of technologies: environmental monitoring, dog monitoring and active communication.
The dogs will be equipped with passive environmental monitoring devices – such as microphones, cameras and gas sensors – that allow the dogs to retrieve and transmit data from the field in real time.
“We’re developing a platform for sensors that is designed to be plug-and-play, allowing emergency responders to further customize the harness,” Bozkurt says. “For example, if there’s the possibility of a natural gas leak, you could attach a natural gas sensor. Or if there’s the possibility of radiation, you could attach a Geiger counter.” Using wireless communications, the sensors can be monitored remotely at a command center or by dog handlers on a handheld device nearby.
The harness also includes new sensors developed by Bozkurt and Roberts that monitor a dog’s behavior and physiology, such as heart rate. These sensors will allow both dog handlers and the emergency response command center to remotely track a dog’s well-being and to determine if the animal has picked up a scent or found a specific object or area of interest.
The active communication technologies on the harness will allow handlers to relay commands to a dog remotely. Bozkurt and Roberts have incorporated audio communication, via speakers, into the vest. However, they think the more reliable remote communication will come via “tactile inputs” – they’re training dogs to respond to gentle “nudges” that come from within the electronic harness itself.
“I want to be clear that these are not aversive punishments, but slight, tactile nudges from motors in the vest – like a vibrating cell phone. We’re using exclusively reward-based training techniques,” Roberts says.
Bozkurt, Roberts and the rest of the SERS team will be participating in the Smart America Challenge event in Washington, D.C., this summer.
“After that, we plan to continue to engage emergency response personnel to identify and overcome any obstacles to putting these smart-recovery techniques to work in the field,” Roberts says.
Roberts and Bozkurt’s work with their collaborator, Dr. Barbara Sherman, is supported by a grant from the National Science Foundation.
See the Smart Amerca Challenge video here: