The Department of Computer Science at NC State University is pleased to announce the creation of the Dr. Carl C. Hughes Scholarship Endowment honoring the NCSU alum and life-long academician. 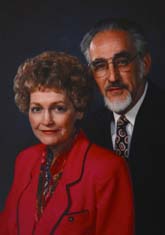 This endowment is established by Dr Carl C. Hughes’ wife of fifty-one years, Dr. Barbara Ann Hughes, as a way to honor the life and legacy of this career educator who passed away on October 16, 2013.
This endowment will support a needs-based scholarship that will be awarded annually to a qualified computer science student from an underrepresented class who is pursuing a dual major in computer science and applied mathematics or similar degree.
The endowment is being funded with an initial gift of $26,000...$25,000 to create the endowment and $1,000 to fund the initail scholarship award for the 2014-15 academic year.
As a graduate student, Hughes taught mathematics at The Ohio State University and at North Carolina State University. He was an Assistant Professor at the University of South Carolina and he taught for more than 27 years as an Associate Professor at Fayetteville State University, where he served as the Chair of the Faculty Senate 1993-94 and received the Faculty Senate Exemplary Service Award. Among other honors bestowed on him was a National Science Foundation Scholarship for doctoral studies and for summer study of computer science at Potsdam (NY) University. He received his PhD in Applied Mathematics from NC State University in 1973.
Dr. Dwight House, the chair of the department of mathematics and computer science at Fayetteville State University recounts memories about his dear friend and colleague. “Carl was the first person I know of to have students use computers in the classroom to gain hands-on experience with the topics under discussion. Now this practice is common,” said House.
According to House, Hughes spent many late evenings in his office and could often be seen talking to students.  He was not only active in the department; he also served in the Faculty Senate and as a faculty representative to the UNC Board of Governors in Chapel Hill. According to House, “We must have had hundreds of conversations on just about all topics under the sun, but mostly teaching computer science.  I enjoyed every one of those conversations…Carl was a wonderful friend and colleague. My life is certainly much richer for having known him.”
Ken Tate, director of development & external relations for the department says, “The department is honored with the creation of this award remembering this great man and his contributions to mathematics and computer science.”
The Dr. Carl C. Hughes Scholarship Endowment joins a growing list of fully endowed scholarships that will provide perpetual support to future generations of computer science students.  If you would like to contribute to this award, or explore just how easy it is to establish your own named and endowed scholarship, contact Ken Tate at tate@csc.ncsu.edu.