The Series Kicks Off on September 24 with Michael Lopp, Silicon Valley-based Author & Speaker.  This talk takes place at 6 p.m. in the Auditorium of the new James B. Hunt Library.

Thanks to the continued generous support of Super ePartner, Fidelity Investments, the Department of Computer Science at NC State University is very pleased to announce a dynamic and impressive slate of speakers for the Fall 2013 Fidelity Investments “Leadership in Technology” Speakers Series.

Please mark your calendars and plan to attend.  The Fall 2013 line-up of speakers includes:
Tuesday, September 24 (in Hunt Library Auditorium)

Tuesday, November 19
Bob Geolas, President and CEO, Research Triangle Foundation of North Carolina
Topic:  “The Research Triangle Park Asks – What Great Things Can We Do Together?”
Dr. Mladen Vouk, professor and department head, comments, “We are grateful to Fidelity Investments for their continued support of our department and this speaker series.  This series continues to be one of the most popular on campus, and we are pleased to kick off our seventh year with such an exciting slate of speakers. 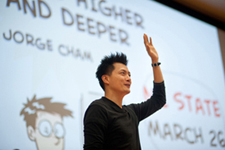 Created and hosted by the NC State Department of Computer Science, the Fidelity Investments "Leadership in Technology" Speakers Series was created to provide students of all disciplines, as well as the extended university and business community, exposure to the unique world of leadership in technology.

The series, launched as a part of the computer science department's 40th Year Celebrations in 2007 and made possible by a generous donation by Fidelity Investments, features accomplished and highly recognizable entrepreneurs, leaders and executives to speak on a variety of technology-focused leadership topics. The variety and quality of the speakers has resulted in the series quickly becoming known as one of the premiere speakers series on campus.

All talks are scheduled to take place at 6 pm in Room 1231 in EB2 (except the Michael Lopp talk to be held in the Hunt Library Auditorium), the department's state-of-the-art research and teaching home on NC State's award-winning Centennial Campus.

Each talk is free and open to the public. Free parking is available in the deck on Partners Way. (directions & map).