Giving Hope to the Hopeless - The Future is Today

Leveraging education and a passion for soccer, this NC State computer science alum is transforming lives on an international scale! 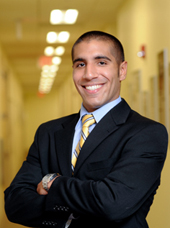 In a world where athletes are elevated to hero status yet continue to disappoint their fans with their behavior and lifestyle choices, meet a young man who was given the opportunity of a lifetime through athletics and has chosen to give back the good fortune and support he has received.
Romulo Manzano, is a computer science graduate from NC State, who came to the university in 2008 on a soccer scholarship from Caracas, Venezuela.  Manzano credits this opportunity with being a turning point in his life.
“Where I am from, it is very dangerous,” he said. “Numbers suggest that over 80 percent of people who live in Venezuela live in poverty.  The city I am from is very violent, and the problem has spread nationwide.  In 2012, an estimate of 50 people were killd per day in Venezuela.  Yet, I was fortunate to be raised in a comfortable life.  I was not exposed to that violent environment.”
While he lived a life of comfort with loving, supportive parents, Manzano wasn’t far removed from those who didn’t have the same lifestyle.  His passion and talent for soccer led him to play with one of the best clubs in the nation.  Among his teammates were players of all backgrounds and experiences. 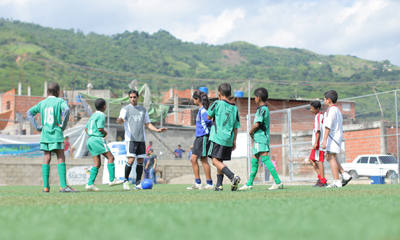 “It didn’t matter what kind of student you were or whether you came from a mansion or the slums; when we were on the field, nothing else was relevant, we understood that we were equal,” he said. “It made me understand how people’s lives could be so drastically different than mine.”
Manzano’s family roots were not planted in lives of luxury. His father grew up very poor, having lost his own father at a young age. Selling newspapers and working in a laundry shop were some of the jobs he had in order to pay for his college degree and help his mother provide for the family.  Working hard to achieve his goals is a lesson he passed on to his son.
“He has always taught me to be humble and remember where I came from,” he said. “I was taught to remember not to let success take me away from where I came from in life."
Manzano played for NC State’s soccer team during his junior and senior years of college.  Not only did he succeed athletically by being on a nationally ranked team, he also graduated summa cum laude in 2010 with a B.S. degree in Computer Science.  He was quickly hired by Credit Suisse and worked for a year in their Raleigh office before being transferred to the New York headquarters.

“I was given all this opportunity and I considered myself to be very lucky,” he said. “Last year, I decided to find a way to give back to the community by combining the knowledge I have from my degree and my experience with soccer. Three of my friends who were also NC State students from Venezuela, joined me in creating our nonprofit, "Futuro Es Hoy” (FEH), which means The Future Is Today.”
With his heart still firmly planted in his native country, Manzano and his friends, Ivan Gomez, Jorges Risquez and Carlos Villa, decided to focus their energies on improving the lives of children in their home country through sports (Manzano, Risquez and Villa were all soccer players at NC State).  Their efforts developed into soccer camps that are held in some of the worst slums of Caracas, where they work with children from ages six to 16. 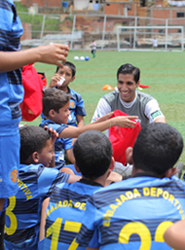 “The only way to solve the problems and break the cycles that these kids are growing up in is to choose to do something that they all have in common and in Venezuela, that would be soccer,” he said. “We have put together soccer clinics that teach values through sports, such as team work, conflict resolution, the importance of education. We want to neutralize the negative aspects of the violence that surrounds them by giving them something positive to work on through soccer.”
The nonprofit is taking off and has attracted the attention of local Venezuela universities and other nonprofits, in hopes of assembling a great team of supporters to expand the clinics into even more opportunities for outreach with local youth. In fact, Aflatoun, a nonprofit from the Netherlands, is working with Manzano and his partners to create a social education curriculum targeted at the youth they want to serve in Caracas. 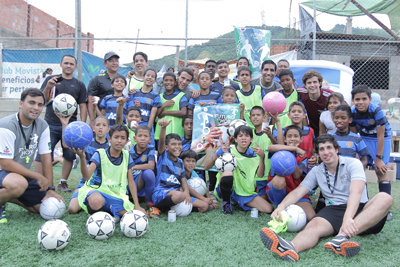 “The next step for us is to build the education component of the clinics, so we can really enrich these kids’ lives,” he said. “My background in computer science will come into play as we try to develop good resources for them such as videos, webinars and the technology tools like tablets, virtual classes and maybe small computer labs so they can gain the knowledge they need to get ahead in life.”
Manzano also realizes that his background is not completely suited for fixing all the social ills that these children encounter in their daily lives, but he is willing to pitch himself headlong into helping them where he can. He also cites his experience at NC State as one of his biggest motivators to give back.

Manzano cites the biggest challenge of his organization is to make education really accessible to the children in need. The schools have very limited resources, virtually no facilities, no supplies, and are not easily accessible to teachers.
“This is the reality of the slums on this planet. Now, for every problem, there must be a solution, and we believe that there is a way to overcome these obstacles,” he said. “Technology closes accessibility gaps, brings together information, and eliminates physical boundaries. This is the beauty of science, it is meant to solve real problems, for real people. FEH will use these principles to design and tailor a platform that allows us to make education accessible to all. The road is long, but we will work towards transforming an idea into a reality.”
If you'd like to learn more about Futuro Es Hoy, contact Manzano via email at romulo.manzano@futuroeshoy.org.
~brackett~