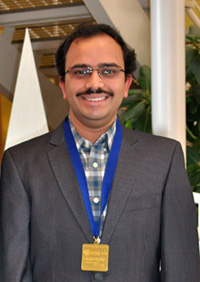 Congratulations to NC State Computer Science PhD student Sarat Sreepathi for winning the Gold Award at the ACM Graduate Student Research Competition at the International Conference for High Performance Computing, Networking, Storage and Analysis (SC 2012) held in Salt Lake City, UT on November 10-16, 2012.
The winning paper is titled “Optimus:  A Parallel Optimization Framework with Topology Aware PSO and Applications.”  Sreepathi’s research was motivated by complex search problems that are encountered in urban water distribution systems such as contaminant source characterization and leak detection. Water Distribution Systems (WDSs) are the primary supplier of safe drinking water to the public. They form a critical infrastructure that is vulnerable to accidental and intentional contamination incidents that could result in adverse human health and safety impacts. Identifying contamination events is therefore of high priority for municipal authorities to rapidly deploy mitigation actions. Similarly, leaks due to breakage of pipes can be potential intrusion points for contamination as well as lead to significant economic losses for the utilities due to loss of water during distribution before reaching the customers.
Solving such problems requires the coupling of high performance computing (HPC) systems with efficient optimization methods. To that end, Sreepathi’s research focused on the design and development of a parallel framework called “Optimus” and swarm intelligence based optimization methods. Optimus proved effective in solving WDS problems and demonstrated good computational performance by scaling efficiently to hundreds of thousands of cores on the leadership class Cray supercomputer at Oak Ridge National Laboratory.
His work includes a novel search algorithm for graph-based problems that was applied to identify leaks in a large urban WDS. This algorithm could potentially be adapted for other network-based optimization problems, for instance in Epidemiology, Cybersecurity, Logistics and Geospatial domains.  To read the award-winning paper, click here.
ACM Student Research Competitions (SRCs), sponsored by Microsoft Research, offer a unique forum for undergraduate and graduate students to present their original research at well-known ACM sponsored and co-sponsored conferences before a panel of judges and attendees. During the first round of the competition, participants presented their work and answered questions at the Research Poster Reception. Selected semi-finalists were then invited to give a brief presentation about their research in the next round. Students selected as SC'12 SRC award winners receive an ACM medal, a monetary prize, and an opportunity to compete in the ACM SRC Grand Finals.
Sreepathi, who recently defended his PhD, is advised by Dr. Kumar Mahinthakumar.
For more information on Sreepathi, click here.
For more information on the ACM SRC held at SC 2012, click here.
For more information on ACM SRC, click here.
~###~