Ahead in the Clouds

People still work with their hands in Pitt County, a largely agricultural community settled on rolling hills midway between North Carolina’s capital city and the Atlantic coast. Manufacturing plants dot the landscape, from the 1.5 million-square-foot DMS pharmaceutical facility in populous Greenville to the modest Package Craft corrugated box plant in Bethel, a crossroads village once said to be 16 miles from everywhere.
But jobs are hard to come by in this fast growing county, where a 25 percent surge in population over the past decade has far outpaced economic opportunity.
“We’ve seen a lot of textile mills and manufacturing plants go away over the past few years,” says Mike Clendenen, a resident since 1965.
With the unemployment rate stuck at more than 10 percent for the past three years, life in the area can be a struggle, despite a mix of positive factors that landed Greenville–the county seat–on this year’s Forbes list of the best small places for business and careers.
Clendenen wants to make that distinction a reality in every corner of the county, from Fountain, where over a third of families fall below the poverty line, to Farmville, where churches outnumber retail shops in the historic downtown.
In his office on the campus of Pitt Community College in Winterville, where he’s director of distance learning and instructional technology, Clendenen plays a key role in helping students acquire new skills for a changing job market. It’s challenging work.
But thanks to cloud computing technology developed at North Carolina State University, students in one high-tech training program now have access to advanced software that would have been out of reach for many just a few years ago. 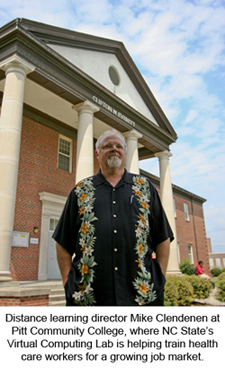 Leveling the Field
The enthusiasm for the VCL is understandable. Not only does the system promise to revolutionize distance education by allowing schools to offer highly advanced online courses, like the HIT program at Pitt, it also frees up space in on-campus computer labs as more students move to virtual labs.
Since its modest beginnings, the network has grown to accommodate use by other schools in the University of North Carolina system, including UNC Pembroke, North Carolina Central and East Carolina University. The state’s community colleges have also jumped on board, kicking in funds to purchase more blades and to cover some of the maintenance and administrative costs.
In 2009, the National Science Foundation awarded $1.8 million to NC State to underwrite a project to bring dynamic mathematics software to rural, underserved high schools in North Carolina via the VCL.
Sarah Stein, associate professor of communication and a self-described “non-geek,” is leading that project. She says the goal is to hook youngsters on math and science early, especially algebra and geometry.
“If you get through those, you’ll go further in math,” she says. “If you do something well, you’ll feel better about doing it again.”
The university launched the project in four rural North Carolina school districts that are also served by state initiatives to improve broadband connectivity and increase the availability of laptop computers for K-12 students: Green, Chatham, Edgecombe and Mooresville Graded.
“It’s hard enough for universities and colleges to maintain computer labs,” Stein notes. “When you go down to the K-12 level, resources are pretty thin.”
At Northwood High School in Chatham County, math teacher Kevin McDaniel says technology-rich tools are the key to engaging students in tough subjects like the Algebra 2 course he teaches.
“Something like this will engage them,” he says, pointing to a laptop running a data simulation program called Fathom. “This program is dynamic. You can predict outcomes; you can load data sets and see every single scenario.  Students want that kind of interactivity.”
By using the VCL, high schools in underserved areas can take advantage of industry standard software in science, technology, engineering and math, the so-called STEM disciplines that often lead to high paying careers. Students in poor and rural districts need not be left behind simply because they can’t afford a top-of-the-line computer loaded with lots of memory, processing power and software programs.
Open Source Solution
But schools don’t have to partner with NC State to take advantage of the technology. The VCL code base has been accepted by the Apache Software Foundation as a top level project, making it freely available for developers to download and adapt.
On the West Coast, the California State University system has tailored the software to serve students and faculty on a half-dozen campuses. In an era of tight budgets, the network has helped California’s cash-strapped colleges save money without restricting student access to advanced computer programs.
That, says Schaffer, is the beauty of the mission of a land-grant university.
“When we saw that we had something that worked, our first thought was to share it,” he says. “Our first thought was for the larger world.”
~###~