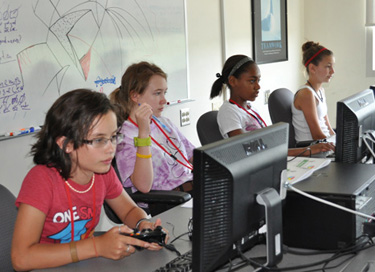 A group of 24 middle school girls attended a new Middle School Girls Computer Science Camp the week of July 16 as part of the College of Engineering’s Summer Programs.  The camp focused on engineering design challenges including learning about and designing computer games, and working with other computer applications.  The camp was coordinated by Dr. R. Michael Young, professor of computer science and director of the Digital Games Research Center at NC State, and PhD student Lucy Shores was the camp's team leader.
The camp provided the girls with an introduction to computer science through a variety of guest speakers, field trips, and hands-on projects activities including: 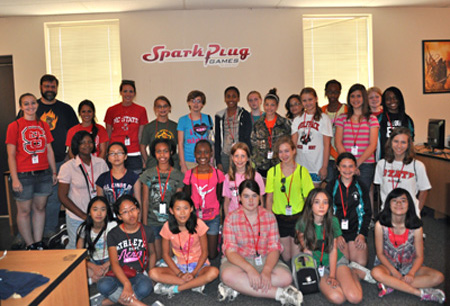 The week culminated with a poster session and reception sponsored by the Computer Science ePartners Program where the girls could present their games to family, friends, faculty and staff.
“This is one of the first times we’ve had a camp like this designed specifically for middle school girls," said Dr. Young.  "We focused on girls at this level because studies have shown that it’s at this stage that students, especially girls, begin to lose interest in STEM (science, technology, engineering and math).  We wanted to show the girls that computer science and engineering can be fun, and we encouraged them to pursue STEM in their higher grades.”
Photos of the camp can be found here.
For more information on the College of Engineering’s Summer Programs, click here.