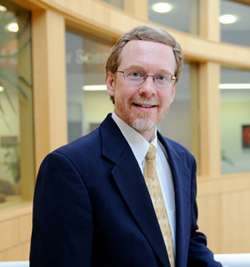 North Carolina State University researchers are launching a project to develop a video game that will help improve computer science knowledge in middle school students – and contribute to a better-educated workforce in the future. The game, which is being developed under a $1 million grant from the National Science Foundation (NSF), could be used nationally if it proves successful.
“Looking ahead, the United States is facing a significant shortage of people who will be able to fill jobs in science, technology, engineering and mathematics fields. That shortage is particularly acute for computer science,” says Dr. James Lester, a professor of computer science at NC State and primary investigator (PI) of the project. “Forecasts consistently predict that we will have far more computer science jobs than there will be trained personnel to fill them.”
One reason for this problem is a lack of students entering college with a basic knowledge of computer science. The shortage is particularly marked among girls, who tend to steer away from math and computer science in middle school, studies show.
“Our goal is to create a video game that will help middle-school students understand basic computer science concepts and related skills,” Lester says. “We want to encourage students to pursue computer science in high school and beyond, and we want to give them the foundation they’ll need to do so successfully.”
While the project is not specifically focused on boys or girls, the researchers plan to incorporate game elements designed to engage female students. For example, elements of the game will be linked to real-world issues such as public health and environmental challenges, which have been shown to appeal to female students.
The researchers will also be working with middle-school teachers and administrators in North Carolina to develop and test the game – and to assess the effectiveness of the program in the classroom.
“We need to make sure this produces real results,” Lester says. “And if it does, we would like to roll the program out nationally.”
The NSF grant runs from January 2012 to December 2014. Co-PIs on the project include Dr. Kristy Boyer, an assistant professor of computer science at NC State; NC State computer research scientist Dr. Bradford Mott; and Dr. Eric Wiebe, an associate professor of science, technology, engineering and mathematics education at NC State.
NC State’s Department of Computer Science is part of the university’s College of Engineering. The university’s Department of Science, Technology, Engineering and Mathematics Education is part of the College of Education.
-shipman-