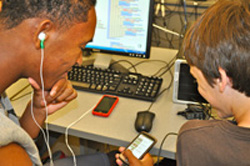 During two week-long camps this summer, 59 high school students stretched their imaginations and created Android applications (“apps”) like “Android Tag” (a location-based hide and seek game), “TXT to Speech” (an app that reads texts and expresses displeasure when the phone is shaken), “Atom Splitter" (a game of growing your atom while avoiding nuclear holocaust), and “15 Pennies” (a two-player logic game). The students created these apps during the Computer Science Software Engineering Android Applications Workshops, part of the College of Engineering’s Summer Programs. 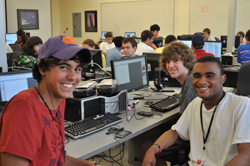 The Computer Science Department hosted two independent resident workshops (the students stay on campus in residence halls) providing the students with an introduction to computer science through a variety of fun and exciting hands-on projects such as the invention of the above-mentioned Android apps using AppInventor. Students worked on their projects, but they were also able to experience NC State, and college life, in a residential setting. They worked on their projects for four days, then on Friday presented their work during a poster session where they could demonstrate their apps to family, friends, faculty and staff. 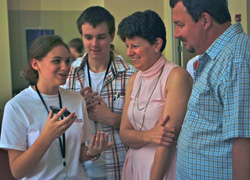 “I was really impressed with the students’ creativity, and at how quickly some of them picked up the skills needed to create these apps,” says Dr. Sarah Heckman, a three-time graduate of the NC State Computer Science Department (B.S., 2004; M.S., 2005; and Ph.D., 2009), and the leader of this year’s summer workshops. “Some of them had never done any coding in high school, but it didn’t seem to slow them down. I can’t wait to see what they come up with next!”
Photos of this year’s workshops can be found here.
To learn more about the Computer Science workshops, click here.
For more information on the College of Engineering’s Summer Programs, click here.
~coates~