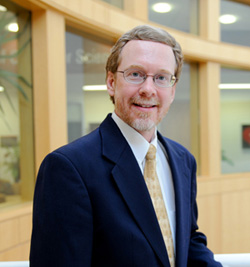 North Carolina State University has landed a grant to boost science literacy by developing a narrative video game that uses adventure to help middle school students develop their literacy skills – particularly their ability to read and understand scientific and technical language.
The NC State research team will be working quickly. The $500,000 grant, from the Next Generation Learning Challenges program (NGLC), began July 1 – with the goal of creating and disseminating the educational game by September 2012. NGLC is overseen by the nonprofit group EDUCAUSE, and funded by the Bill & Melinda Gates Foundation and the William and Flora Hewlett Foundation.
“We’re focused not only on teaching literacy broadly, but on giving students the tools they’ll need to comprehend scientific and technical literature. That’s an area that is presenting challenges for students nationally,” says Dr. James Lester, a professor of computer science at NC State and primary investigator for the grant. “The trick, of course, is to make a game that is actually fun, as well as educational.
“Our goal is develop a game that will get kids engaged and make them better readers. And we want the game to work for students of all backgrounds – this is a tool that will be used in schools with diverse student populations.”
The grant project will be building on the “Crystal Island” software that Lester’s research team developed to teach biology concepts to middle-school students in the framework of a “science mystery.”
By September 2012, Lester’s team plans to have rolled the program out into classrooms for at least 1,000 students in rural, eastern North Carolina. The team also plans to scale up the software and related educational outreach components, with the goal of having at least 25,500 students using the program each year by 2016.
The NC State team, led by Lester and computer science researcher Dr. Brad Mott, will be developing and testing the game software. Additional work will be done by researchers at East Carolina University (ECU) and the GO-Science education organization. ECU, for example, will be holding related training workshops and disseminating the game to teachers. NC State’s share of the grant is approximately $327,000 – the rest goes to the subcontractors at ECU and GO-Science.
NC State’s Department of Computer Science is part of the university’s College of Engineering.
-shipman-